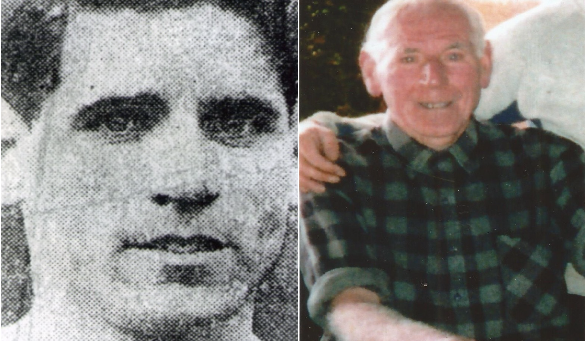 Paddy Haughey: ‘Forgotten man’ of Donegal athletics to be honoured

SOMEONE once wrote that ‘to be forgotten is to die twice’ and on Sunday the Donegal Athletics Board will honour one of the forgotten.

When the Athletics Team of the Millennium was selected in 2000 Paddy Haughey would have been an automatic selection if the selectors had known of his exploits.

Committee members hope to set the record straight on Sunday when he is honoured posthumously by the County Board.

He was born in Teelin in 1918 he joined the Army at the outset of World War 2 and was stationed in the Curragh where he joined Curragh Athletic Club.

In 1946 Paddy joined the Brownstown Athletic club in County Kildare, Brownstown is situated just outside the Curragh military camp and was affiliated to the AAU at that time and this opened up the possibility of International competition for him.

He finished second in the AAU Senior Cross-Country Championships, led Brownstown to the team title and was selected on the Irish Team for the International Cross-Championships which were held in Ayr in Scotland that year.

Paddy became the first Donegal athlete to be selected to represent Ireland He finished in eleventh place in the race and was the second Irish scorer. Paddy also won the 10 mile road championships and third in the 3 mile track championship that year.

In 1947 Paddy retired from the Army and went to work for Guinness in Dublin, he transferred to Donore Harriers Athletic Club where he continued to flourish finishing fourth in the National Senior Cross-Country Championships and leading Donore to the silver medals.

1949 saw Donore again finish in the silver medal position in the National Cross-Country Championships with Paddy a prominent scorer.

He earned selection for the International cross-country championships which were held in Baldoyle. Ireland were not expected to feature in the top six teams but they confounded the critics Paddy finished fourth Irish scorer and the team won the bronze medals.

The race was won by the great Alan Minoun of France Paddy retired from athletics after that race and moved back to Donegal when he retired from Guinness in 1983. He died in 1998 and two of his sons Al and Patrick still live in Killybegs.

The International Cross-Country Championship began in 1903 and initially consisted of Ireland, England, Scotland and Wales, however other countries were quick to apply for membership and soon France, Spain, Portugal Belgium, Denmark, New Zealand, Holland, Tunisia, Morocco USA and Canada were taking part.

At its peak the number rose to eighteen countries in total with over 200 runners taking part and was the major Cross-Country event in the World.