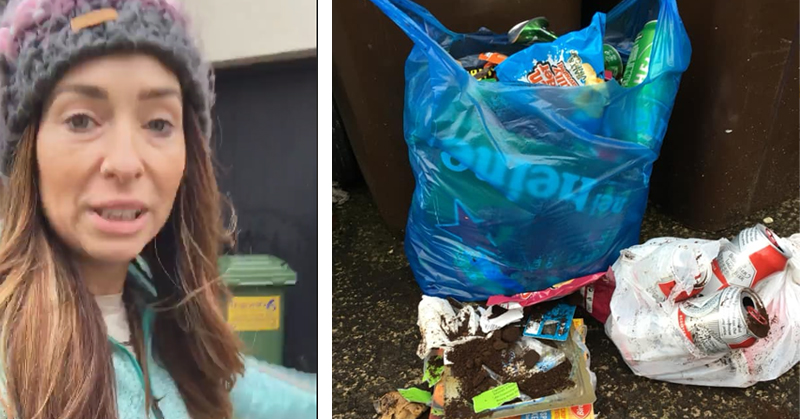 A Ballyshannon coffee shop owner has been forced to call out a serial dumper who is threatening her zero-waste ethos.

Fiona Mc Intrye opened Donegal’s first zero waste, sustainable cafe at the end of May. But around a month after launching Simply Green, a person began dumping their rubbish into the recycling and compost bins outside the premises every week and sometimes twice a week.

Furious with the frequency of the dumping, Fiona took to Facebook Live this month to call on the public to help her find out who was responsible.

The video struck a chord with Fiona’s followers and the wider community. Soon, it gained over 26,000 views as it spread across Facebook.

Two weeks on, with the dumping still continuing, Fiona is taking action to turn the case into something positive.

Speaking to Donegal Daily, she said: “Once I have solid proof of who this man is I want to sit and talk to him about waste and maybe help him get a bin, because the bigger issue is he can afford to buy drink, judging by the amount of cans he is dumping, but he doesn’t have bins.”

Fiona’s zero waste cafe does not provide customers with single use cups, lids or boxes and offers liquid and dried food refills to prevent as much as possible going to landfill.

But the dumper clearly hadn’t got the Simply Green message, as the majority of their waste is recyclable cans in plastic bags.

Some of the rubbish dumped at Simply Green Ballyshannon

“The irony is that a lot of his waste can be recycled for free in the car park down the road,” Fiona said.

“The only bins we have are recycling and industrial compost and there is a lot of work behind it. So when this person dumps their bags we have to wash all his waste and bring it to the recycling for him. As much as what he is doing is wrong, it’s also costing me money for every lift that the bin company makes.”

Fiona says she is changing her bins this week to install padlocks and will be setting up cameras to identify the culprit.

While she wants to talk to the person directly, she said she is hoping the dumping can promote a positive message to others.

She said: “I want to try and turn my annoyance into something positive and I want to influence people in a different way. There is a much bigger picture in this country and that is waste and waste disposal and that comes down to the government.”