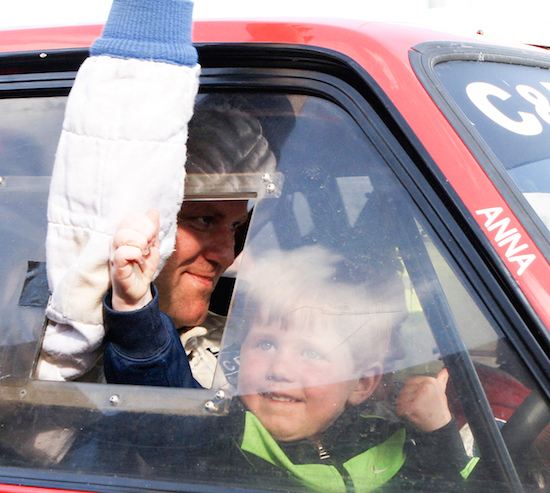 DD Motoring: Memories of Manus live on at Tribute night

DD Motoring Columnist Brian McDaid counted Manus Kelly as a friend. He was at the Mount Errigal Hotel last weekend for what was an amazing tribute to a man many still find it difficult to believe is gone.

Manus Kelly selects first on his sequential gearbox with his left hand as he leaves the finishing ramp after an interview.

Putting his fist out through the hole in the square sliding perspex driver’s window Kelly punches the air as a very young Charlie, his son, sitting on his knee, managed to get his fist out that square window as well to punch the air, much to the enjoyment of the spectators that lined the barriers in the car park that June summers evening.

A closer look at that photo and under that “Mandy Smile” there was a gritty determination that said, ‘I will be back’ and true to the determination on his face that evening, he was.

Firstly to win the National and then in the International in the following years as he made this spot the finish ramp his own on the weekend of the Donegal rally. 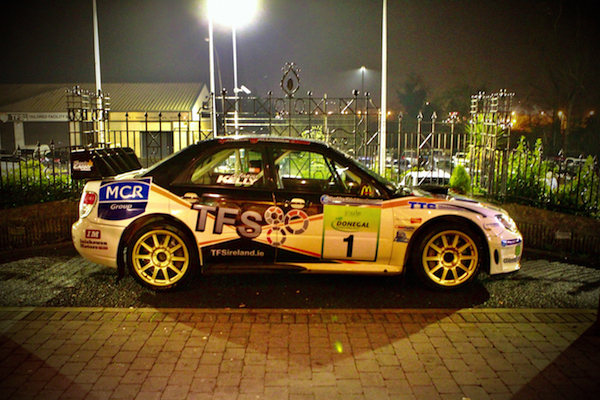 That photo was taken in 2012, and in as many feet as there are years away to 2019 his winning Subaru and Escort were sitting parked the other side of the wall at the Mt.Errigal Hotel for his tribute night.

On Saturday night Just after 8pm the last of the crowd that gathered in the reception of the Mt. Errigal Hotel to honour Manus Kelly made their way into The Glendowan and Glencar Function Rooms for their meal.

Then all of a sudden the reception room was quiet. And as I headed home the automatic doors of the Mt. Errigal reception opened, there in perfect silence sat Manus Kelly’s Subaru. In the time it took me to turn off the flash and turn down the shutter on the camera to try and capture the image of the car in the dark winters night, Mandy’s career flashed through my mind. It would possibly be the last time I would capture an image of this iconic car in the TFS colours.

Manus Kelly was narrowly defeated by Declan Boyle in his old Limelight Mk 2 Escort and took his defeat gracefully that year in that red escort Just feet away from where cars were sitting tonight, on the Rally Ramp back in 2012. Over the years he had his ups and downs. As the image of the Subaru appear in the frame the offices of Manus Kelly business TFS makes the perfect backdrop. But things are far from perfect tonight as the biggest gathering of friends rallied around these last few difficult months since the passing of Manus Kelly to pack out the function rooms for a tribute night to a local hero. Family friends and fans put a brave face on for emotional journey down memory lane.

Before Mandy’s Tribute that night across in The Great Hall Function Room in another part of the Mt Errigal Hotel, the proceeds of Donegal Déjà vu was presented to the Donegal Hospice by Beatty Crawford and Plum Tyndall, listening to Plum and his unmistakable voice, it felt more like the old Ballyraine Hotel.

As the cheque presentation of €25,000 were made and the photos were taken. One of the guests at the function that evening was none other than Cathal Curley who not alone won the 1st ever Donegal Rally but also like Manus Kelly went on to win the event three years in a row in the seventies. Back in those early days, the finish ramp was the actual front door of the old Ballyraine Hotel not unlike where Mandy’s old rally cars were parked tonight.

I’m too young to have witnessed Cathal Curley in his prime in the early 1970s in Donegal but I’m a massive fan of the folklore he created in promoting what it meant to win the Donegal Rally. Curley drove a flat-six boxer engined Porsche to victory back then AUI 1500 now a collector’s item, and Manus Kelly also drove a flat-four boxer Subaru to victory for his hat-trick also making his car one of the most famous in rallying history.

In the early days of the Donegal rally when the Parc Ferme for the event was a field behind the old Ballyraine Hotel, Carrie Harvey who was at the hospice presentation on Saturday night told the story of her late husband Eamon. 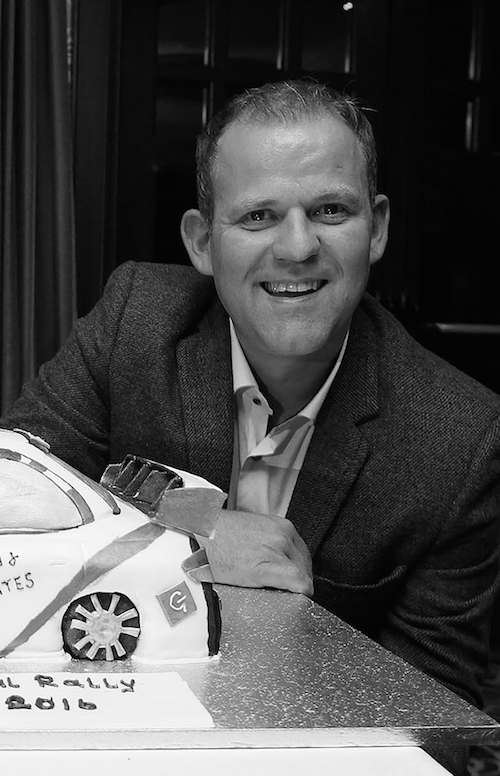 A smile for a hero Manus Kelly at the celebration of his 1st outright win of the Donegal International Rally. Photo Brian McDaid

Like all the other drivers he was surrounded by young fans with notebooks getting autographs, and was enjoying the notoriety until Seamus McGettigan who was one of the co-drivers came up to the door with a rally cap pulled down covering his face and got an autograph of Eamonn before he released it was McGettigan taking a hand out of him.

The days of autographs have now become as faded as the ink they were once scribbled down those signatures with. Now it’s “the selfie” a photographic copy of a memory in time we once enjoyed pictured with a local hero like that the late Manus Kelly was.

He took us on amazing journey which ended far too soon, and Saturday, night thanks to his close friends and family and his team we were back in the memories for a memorable night. 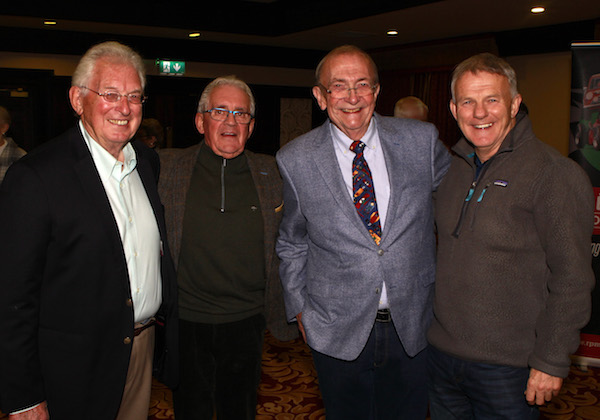 The first winner of the Donegal Rally Cathal Curley with Beatty Crawford, Plum Tyndall and Rory Kennedy at the Deja Vu presentations to the Donegal Hospice on Saturday Night. Photo Brian McDaid.