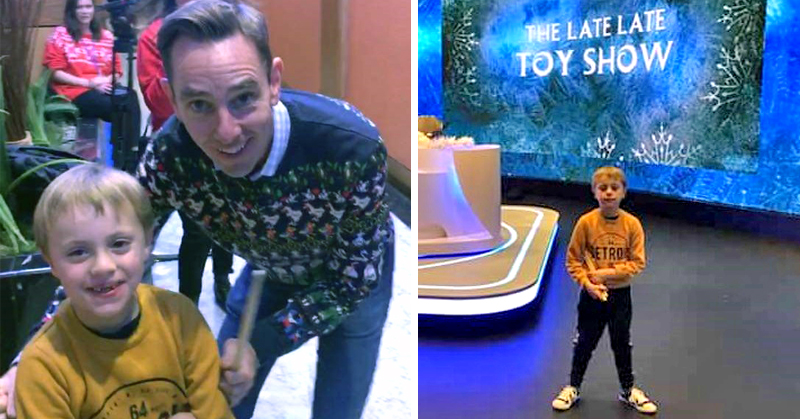 Rathmullan’s little drummer boy Finlay Sheridan is only seven, but he’s already been tipped as Ireland’s youngest rock star – counting Minister Joe McHugh as one of his biggest fans.

And the whole of the village, and indeed Donegal, will be glued to their screens this Friday night when Finlay rocks The Late Late Toy Show in front of 1.5 million viewers.

Totally unfazed by all the attention he’s been getting, the first-class pupil from Drumhalla NS, which only has 32 pupils,  has been wowing audiences locally with his amazing talent, and has already played live on BBC Radio Foyle.

And recently he gained a new fan when Education Minister Joe McHugh visited his school to raise their Active Flag.

Finlay who plays in the family band My Generation along with his dad, Daniel and brother Evan jumped on the drums in his school uniform to play Seven Nation Army by The White Stripes, and the Minister for Education and Skills was blown away by the performance.

Now, as Finlay and his family head off to Dublin for Friday’s Late Late Toy Show, Minister McHugh sent a good luck message to them all.

Recalling the first time he’d watched Finlay at Drumhalla NS, McHugh said: “I had the pleasure of meeting Finlay on a recent visit to Drumhalla National School, and got to hear Finlay play the drums in the band with his dad Daniel and brother Evan.

“What a fantastically talented child Finlay is, and I had to remind myself quite a few times, that he is only seven years of age!

“I would like to pass on my best wishes to Finlay for an amazing magical few days in Dublin and hope his parents Rachel and Daniel and all the family enjoy this lovely once-in-a-lifetime experience.”