LETTERKENNY Rovers quashed Greystones’ FAI Youth Cup hopes as the Cathedral Town men march into the last 16 of the competition.

Greystones – who stayed overnight in Letterkenny ahead of the tie – arrived at Leckview with every intention of advancement and the first 20 minutes offered little to quash that notion.

And, yet, by half-time Rovers – through goals by Kealan Dunleavy, Jack Dwyer and Nathan Plumb – were 3-0 up.

Rovers played with ten men for much of the second half after Dwyer was shown his marching orders and a 73rd minute penalty by Kelan Collier put the game beyond Greystones’ reach.

Conor Fulham had pulled a goal back, but Collier’s spot kick punched Rovers’ tickets for the next round.

Rovers broke the deadlock on 20 minutes. Dwyer did well to get a second bite from a corner. His clever cut-back inviting the cross from captain Kieran Tobin. A lovely dinked deliver from Tobin was perfectly plodded and Dunleavy headed home at close range.

It was just what Rovers needed – and two goals in the space of 85 seconds killed the tie.

Dwyer rose brilliantly, meeting a super Gavin McGee corner to plant a header firmly into the top corner, past a stunned Jack O’Sullivan.

With Greystones still reeling, the DDSL side cost themselves again just over a minute later.

Luke Dunne’s tame pass inside was intercepted by Plumb, who neatly picked his spot and a low finish made it 3-0. 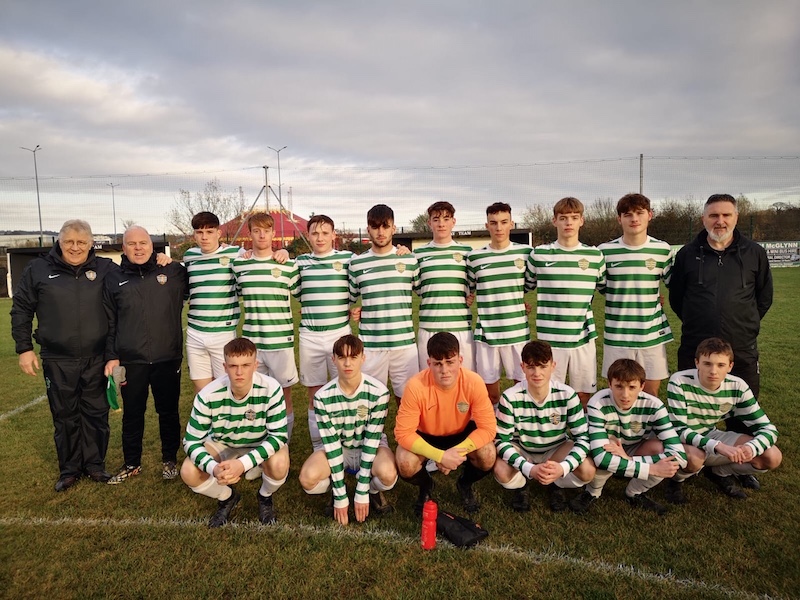 The lead goal came somewhat against the run of play with Greystones looking sharp from the off.

O’Connor tried his luck again soon after, testing home ‘keeper Matthew Whoriskey, as Greystones ramped up the pressure in the early exchanges.

Mark Cullen was next to go close for the visitors but he too was unable to keep a header on target, while Whoriskey did well to palm away Fulham’s low drive.

Rovers were rocked when Dwyer was sent off after getting a needless second yellow from ref’ Marty McGarrigle.

The hosts were tested when Fulham surged in only to flash wide, while Whoriskey saved long-range efforts by Eoin O’Neill and Mark Cullen.

Whoriskey wonderfully tripped over a Jack Elliott free kick that looked seined for the net.

The visitors did get one back when Fulham beat Whoriskey to Cullen’s deliver and fired home.

But Rovers restored the three-goal cushion. Having had earlier appeals for a foul on Adam Yisau waved away, Rovers were awarded a penalty when James Kernan was taken down and Collier tucked home from 12 yards.