Donegal students among 125 All Ireland Scholarships awarded across Ireland

Four Donegal Students were awarded a 2019 All Ireland Scholarship last weekend at the University of Limerick.

Síofra Mauerhofer, Stephen Timlin, Adam Graham and Rónán McHugh were among the 125 students from across Ireland that were awarded.

This award grants them full academic financial support for the duration of their third level studies by sponsor, JP McManus.

Sponsored by JP McManus, the 3rd level educational scholarship is awarded to a minimum of two highest-achieving students from each of the 32 counties.

They must meet a further set of criteria, including attending a non-fee-paying school and being exempt from the Leaving Certificate fee.

The most popular area of study is Medicine, closely followed by Engineering and Science. 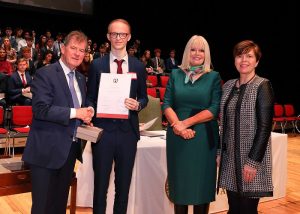 Mr. McManus said: “Today we celebrate the success of the young men and women who are being recognised for their outstanding academic achievements.

“ To the scholarship recipients of 2019, I offer my sincere congratulations; your hard work and commitment is a testimony to your ability and ambition, and I know you will build on your success and continue to strive for excellence in your ongoing studies and future careers.”

Established in 2008, the scholarships are valued at €6,750 per annum in the Republic of Ireland and £5,500 in Northern Ireland and continue for the duration of the undergraduate programme chosen by each scholarship winner.

Guest of Honour, Joe Schmidt, commended the 125 students: “Education is a hugely important part of every young person’s development in life, and it’s fantastic to be able to be here today to recognise first-hand the outstanding achievements of each and every student present.

“I encourage them all to keep working hard and to make the most of their opportunities.”

“They have worked exceptionally hard to get this far. They have already shown the stamina and drive that I expect will be rewarded as they move forward through their studies and on into careers.” 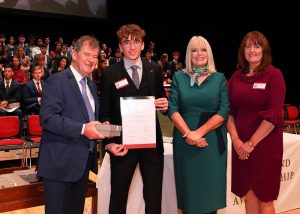 To date, 1,496 students have been awarded an All-Ireland Scholarship and 905 have graduated from university.