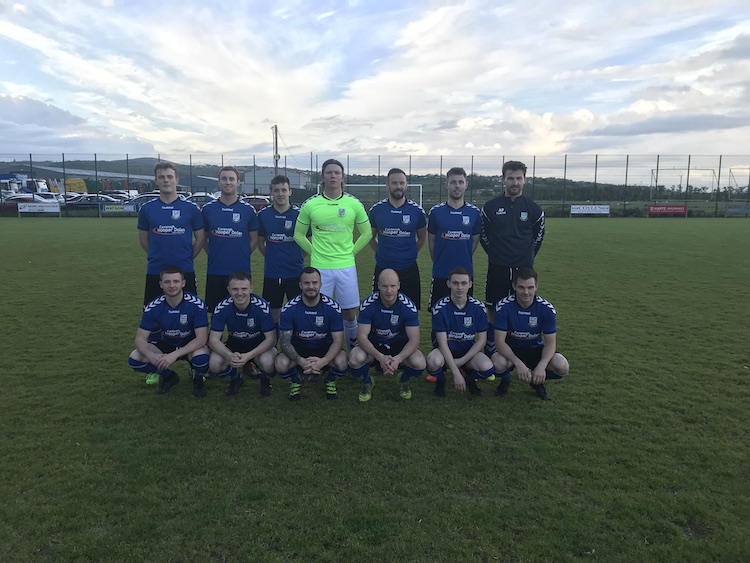 Greencastle prevail on penalties for famous Cup win over Mervue

GREENCASTLE kept their nerve against top Galway outfit Mervue United at Chapel Lane to move into the last 32 of the FAI Junior Cup.

This was a very entertaining game and one which went the whole way with the visitors leading two nil at one stage and then three one before succumbing on penalties.

Enda Curran for the visitors had one early shot wide before Dylan Doherty saved another. In between those Stephen Grant for the home side released Conor Gillen over the top but he was denied by a fine save from Colm Power.

Mervue got on top and both Gary Bailey and Barry Moran were off target before they took the lead on 15 minutes when Curran got on the end of Morans corner to drill home from six yards.

On 33 minutes Nigel McMonagle had an effort blocked before the same player flashed a dangerous cross across goal but there were no takers.

Mervue almost added a second after Curran fed Andrew Connolly but his effort crashed off the bar. The home side finished strongly  before half time with McMonagle cutting in but firing just over before after a Gerry Gill corner James Henry and McMonagle both had efforts blocked.

Mervue started the second half the better with Stephen Larkin, Connolly and Moran all off target with efforts.

They made it two-nil on 68 minutes after Larkin’s deep cross found substitute Peter Walsh who controlled and drilled low past Dylan Doherty.

Greencastle upped the tempo then with Jason Dickson, substitutes Ritchie McElhinney and  Christy Hegarty all having shots deflected or blocked.

Hey got a goal back on 80 minutes with James Henry lifting the ball over the top into the path of Hegarty and he lobbed Power superbly.

Minutes later they were back on terms when Henry fed Dickson whose low effort was well parried by Power but McMonagle pounced to slot home.

In the final minute McMonagle had another good effort saved by Power forcing the game into extra time.

Mervue regained the lead in the first period of extra time after Moran controlled a long ball forward and drilled a superb effort into the  bottom corner from the edge of the area.

Greencastle rallied again and drew back level midway through the second period with Michael Barr finding McMonagle who turned superbly and drilled low to the corner.

Penalties ensued and Greencastle advanced to the last 32 with Dylan Doherty saving two kicks to give them a four-three penalty shootout win.