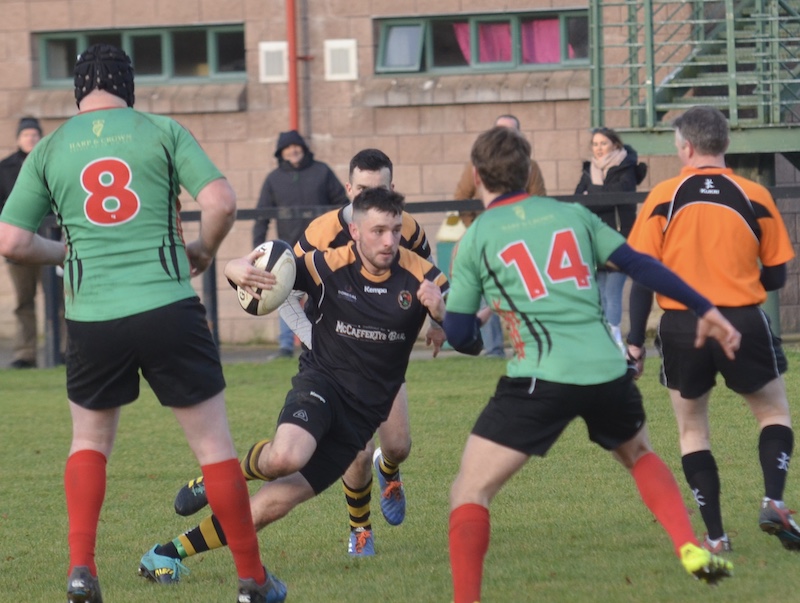 Letterkenny cop a bonus point on return to winning ways

LETTERKENNY got back to winning ways on Saturday as their excellent League form continued with a win against the PSNI in Derry.

It was the PSNI that made the brighter start to the game and early pressure led to a seven-point lead.

Picture: Bryan McGinley on the charge for Letterkenny

This seemed to be the wakeup call Letterkenny needed and from here they took over the game.

A line-out just inside the opposition half saw quick ball off the top and Andrew Gibson put Bryan McGinley into space.

From there, the tricky fullback from Downings jinked and weaved his way deep into enemy territory, just short of the try-line before offloading to hooker McGill to finish off a brilliant piece of attacking play.

Another line-out a few minutes later saw Cormac McMenamin rumble over at the back of a well worked rolling maul.

Dave Brown gets the offload away under pressure

However, right on half time Police levelled things up, a slick backline move put their winger away to dive over in the corner to leave it 12 points apiece at the break.

Whatever head coach Kevin Arenhold said to his troops during the interval seemed to have the desired impact as Letterkenny took total control of the second half.

After some good build up and hard carrying by the pack Ciaran Clarke crashed over for a try early on.

The rest of the game was all about securing the try bonus point, but try as they may, Letterkenny just couldn’t cross Police lines.

With the final play of the game, and hope of the extra point looking lost, up stepped captain fantastic, David Brown.

When Letterkenny were awarded a scrum on half way, the big number eight broke down the blindside, steamrolling the first defender and handing off a second before brilliantly offloading to flanker Sweeney who showed the chasing coppers a clean pair of heels to score under the posts and make good Letterkenny’s getaway with a five-point heist.

As ever, thanks to all our sponsors for their continued support, McCafferty’s Bar, Donegal Orthodontics, Tobin’s Service Station, Churchill Cabs & Minibus hire, Donegal Physiotherapy & Performance Centre and The Washing Well.