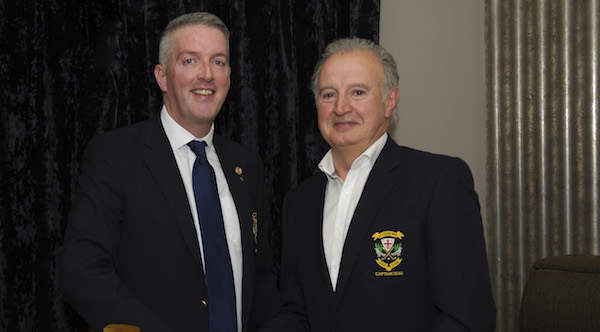 There was a large attendance for the meeting where John Bowe after a very successful year as Club Captain welcomed the new incoming Captain Ed Margey.

Hugh McClafferty acknowledged the outgoing Captain’s dedication and commitment to Club business throughout the year.

Members of Letterkenny Golf Club offer condolences to the family of Seamus Farren who passed away on Friday 29/11/19 after a long battle with illness.

Seamus was a longtime member of Letterkenny Golf Club and actively represented the Club in Inter Club Matches until his illness. He also served on many of the Club Committees and steered the Club through many difficult years in his capacity as Club treasurer.

Seamus took on the Captaincy of the Donegal League Inter Club Team in 2017 and he built up a team steering Letterkenny to back to back wins in 2018 and 2019. Rest in Peace Seamus.

Our Club Professional Seamus McMonagle has launched his annual Christmas Voucher Sale with great deals to treat the golfer in your life this Christmas, or why not buy a voucher for someone who has always talked about starting to play. Vouchers can be used at the Indoor studio or on the Range at Letterkenny Golf Club. Any queries or to buy don’t hesitate to get in contact with Seamus on 087 7800660 or buy in-store at Michael Murphy Sports & Leisure Letterkenny.

A Get Into Golf Voucher can be purchased from the Shop which would be an ideal Christmas Present.

The 25 Card Drive continues every Wednesday night. Members & friends are welcome to join. The very popular Winter Quiz continues every Friday night @ 10 p.m. throughout the winter.