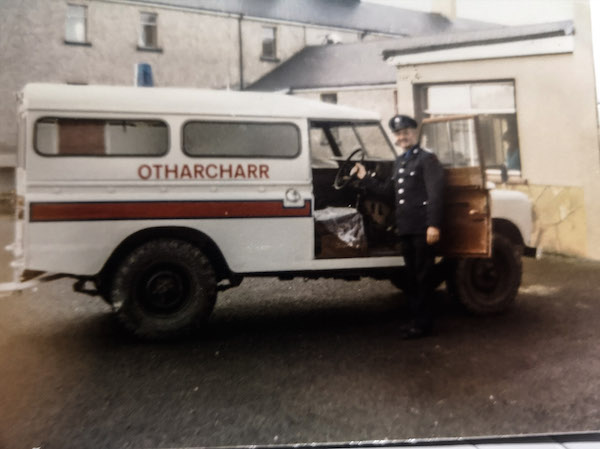 A small Donegal crest stitched to a pilgrim’s backpack on the road in the recent Camino Walk was the link that got two strangers talking.

The one with the crest had it as a memory of her childhood growing up in Donegal, where her father’s profession brought his family to live in Letterkenny.

The other walker, Rosaleen, a native of the town tried in vain to remember the family but nothing was coming to mind.

Both walkers about to head on their separate ways, the lady with the Donegal crest suggested the maybe they didn’t live that long in Letterkenny and that possibly was why she couldn’t remember her family.

James Molloy pictured at the front door of his home at No3 Rosemunt Lane who was Letterkenny’s first Ambulance driver.

“Possibly’ Roseleen replied, feeling slightly deflated, Rosaleen asked. ‘So where did you move to then?’, Ah just out as far as Newtown,” was the stranger’s reply, ‘Newtown –Cunnigham’ Rosaleen replied, “Newtowncunnigham,” Rosaleen said quietly to herself. ‘Now, I know you’.

It was the key to open a memory that Roseleen forgot she had. Here she was far from home on the Camino de Santiago, sometimes known in English as the “Way of Saint James” and Rosaleen has remembered another James from her childhood memory growing up in Letterkenny, that of her late father, James Molloy.

James Molloy was an ambulance driver employed by the Donegal County Council to drive the first motorised ambulance to come to Letterkenny way back in the 1920s in the days of the old Fever and District hospitals in the town.

When an emergency call came into the old Letterkenny District Hospital in the middle of the night Dr. JP McGinley would be contacted who lived nearby on the New Line Rd. and then someone was sent on foot down to No 3 Rosemount Lane to get James Molloy. He then would rush up to the old District hospital on foot and fired up the engine with a starting handle on the old Ford Model Y Ambulance.

Patsy Molloy on his day of his retirement as Donegal Ambulance controller pictured with fellow Letterkenny based Ambulance drivers. Photo Brian McDaid.

If an emergency operation was required James would then set off in the ambulance to Newtowncunnigham where the hospital’s anaesthetist lived. This was the memory that Rosaleen recall to her new-found friend on the Camino walk of their two fathers working together all them years again Letterkenny District Hospital

Rosaleen, (now McCool living in Stranorlar) was the youngest of six children in James and Annie Molloy’s family. They both were from Letterkenny Annie was McCafferty from the Port Rd. Both met in Scotland where they went in search of work, they returned to Letterkenny and set up home at No3 on the Majors Lane just off Upper Main Street also known as Rosemount Lane. James worked for a drinks distributor on the Main St up a lane way behind where Nee’s drapers once was, before he got a job driving the Ambulance in Letterkenny.

In an interview for Donegal Daily at the weekend, Rosaleen recalled her memories of growing up in Letterkenny and how her father’s life revolved around his devotion to the responsibility that was entrusted to him when he was the only ambulance driver in his home town.

In the earlier years Rosaleen recalls here father routine of working as an ambulance driver went there was no time off at all, even though he went to work in the morning and came back in the evening, he might not be no sooner in the door than someone landed at their front door looking for him to go back on a call.

A new Donegal registered Ambulance ZP 3331 back in the 1950’s which with both James and Patsy Molloy drove.

She even remembers him going to the Duffy Circus with them in Callaghan’s Fields just off the Port Rd. and they would be no sooner in the seats when the Circus master would announce ‘Ladies and Gentle Men, Boys and Girls’ if James Molloy is in the audience can he please make himself known to our staff, and that would be her father away on a call.

Roseleen recalled that wasn’t unusual to see her father leaving Rosemount to go to a call on a winters night with a shovel over his shoulder which he would take with him in the ambulance in case he would get snowed in on a call out and would have to dig himself out to get his patient to the hospital in Lettekenny.

He father would seldom talk about his job and the difficult journey he would make over his life as an ambulance driver in them early years in Donegal. On a lighter note he often shared the story of a young Donegal fellow who lived in a very remote part of the county who was sent to Dublin for treatment. On the road up he ended up sitting in the front with James and looked with amazement at the crowds of people walking up and down O’Connell St. ‘Man be a fair on today sir with that crowd about’ was his assessment to James of his first view of the capital.

In 1953 James’ son Patsy, who started his driving career in a bread van and then a bus for the GNR from Pettigo to Lough Derg was appointed as an ambulance driver at the old district hospital in Killybegs.

Patsy Molloy on his day of his retirement as Donegal Ambulance controller pictured with fellow Letterkenny based Ambulance drivers. Photo Brian McDaid.

Now both father and son were on the road in their respective district hospitals in Donegal and a picture of a brand new V8 ambulance ZP 3331 which went on the road in the early 1950’s that both father and son drove at different times. James was still working as a driver until he was 66 and suffered a heart attack. He retired in May in 1959 with 30 years service and sadly died that same year six months later on the 15th of November.

His funeral had a huge attendance in Conwal, and as an Old IRA member his fellow comrades formed a guard of honour and carried his Tricolour covered coffin for the last part of his journey. Military honours were rendered at the graveside when three volleys were fired over his coffin under the command of Hugh McGrath, Captain in command of the Letterkenny company of the Old IRA, and the last post was sounded by bugler Kevin Dillion.

It was reported at the time that the Late James Molloy had travelled over 1,000,000 miles in his role as an ambulance driver and over his 30 years never had an accident, He started out driving an old Ford Model Y and had travelled to every county in Ireland in them early days of emergency transport. This most courteous and careful driver with a million miles under his belt had a ‘Golden Rule for the Road’ which now seems so ahead of his time considering that he passed away over 60 years ago. James Molloy’s Golden Rule was simple “IF YOU DRIVE DON’T DRINK”.

James Molloy one of the first Ambulance driver based in Letterkenny.

Handing on the Baton

I’m sure James Molloy in his final years looked on at the progress of work at the building of new Letterkenny General Hospital but sadly never lived long enough to see it up and running. His son patsy did and moved from Killybegs to take up the position of Ambulance Driver at Letterkenny General Hospital, Patsy took up a very unique role as he also was the first and only ambulance to have his family home within the grounds of the hospital. His family lived in a small single storey flat roof house at the entrance to the main entrance to Letterkenny General hospital known as the ‘gatehouse’

The wasn’t a road or a lane in Donegal that Patsy didn’t know and over the years many a new doctor on call would call over to Patsy’s house for directions on their way to a call out the country.

Like Patsy’s father James, they were all too aware of what an emergency call could throw up and with poor communications because of hills blocking radio receptions in Donegal, Patsy sometimes used a back up system of navigation for ambulance driver going to a difficult to find address, this involved team work with the doctor who would be called out first especially if they were going up unsignposted country lanes, the doctor would tie off a small strip of white bandage to a tree which would be a signal for the ambulance driver to turn off the road at the junction it was placed. Many a patient’s house was located by this simple system when all the other technology didn’t work. Patsy lived in the gate house at the hospital for 16 years before moving to Glencar. In 1980 he was appointed ambulance controller for all of Co Donegal, which was his job for the next 8 years, Then on the 14th of December 1988 her retied from the service after 35 years of service.

Jimmy Sweeney pictured receiving the keys of the Ambulance from Co Donegal Ambulance Controller, Patsy Molloy on the occasion of his retirement, Photo Brian McDaid.

That day of his retirement with fellow Letterkenny based drivers like Dominic Doherty, Johnny Walsh, Henry Murray, Bill Good ,Paddy Curran and Jimmy Sweeney to name but a few he symbolically handed over the keys of an ambulance, a Ford Transit, a far cry from the original Ford Model Y that his father started out on all those years before the Father and son gave 68 years service to the sick and incapacitated. Not alone did they both serve as ambulance drivers, they were there to lend a sympathetic ear, they were the patients’ friend, their councillor to patients on very difficult journeys.

James Molloy’s daughter Rosaleen, and her brother Patsy’s children Michael and Antoinette and nephew Pascal Blake all made it possible for us to recall the memory of what both this father and son did in their dedication to the service over the years they held on to the old photos and the clippings from newspapers which made it possible for us to remember them both this week.

A model Y Ford , believed to be one of the first Ambulance in Donegal IH 482 pictured with nursing staff beside it in the 1920’s