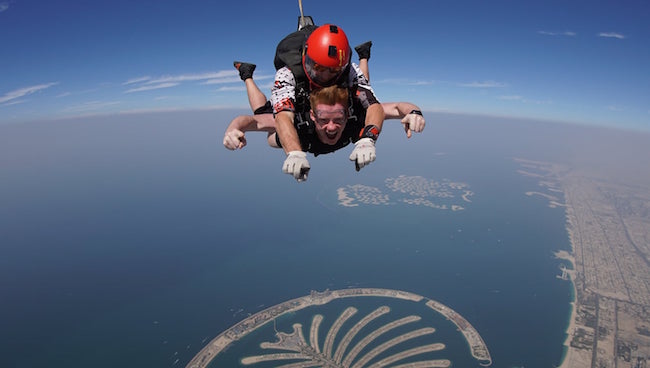 Well-known Rosses man Paul ‘Yank’ Boyle is on Cloud 9 and why wouldn’t he be?

The former Letterkenny Rovers star is currently based in Dubai along with his girlfriend Karen Ní Churráin.

He recently decided to pop the question but any old proposal over any old candlelit dinner wasn’t enough for ‘Red.’

Instead, Paul decided to take to the skies above Dubai for the leap of a lifetime.

What Karen didn’t realise was that tucked inside Paul’s jumpsuit was a stunning engagement ring.

When Paul got back on solid ground, he went down on one knee to propose.

Paul surprises Karen after he parachuted out of a plane in Dubai.

Some claim that Yank didn’t actually mean to drop to one knee but was weak after his parachute jump.

Either way, Karen said yes and a big day is planned for the future.

The pair will no doubt be showing off the rock when Paul’s best mate Mark Forker (formerly of this parish) walks down the aisle with Dunfanaghy woman Mairead Ni Ghallchoir later this month.