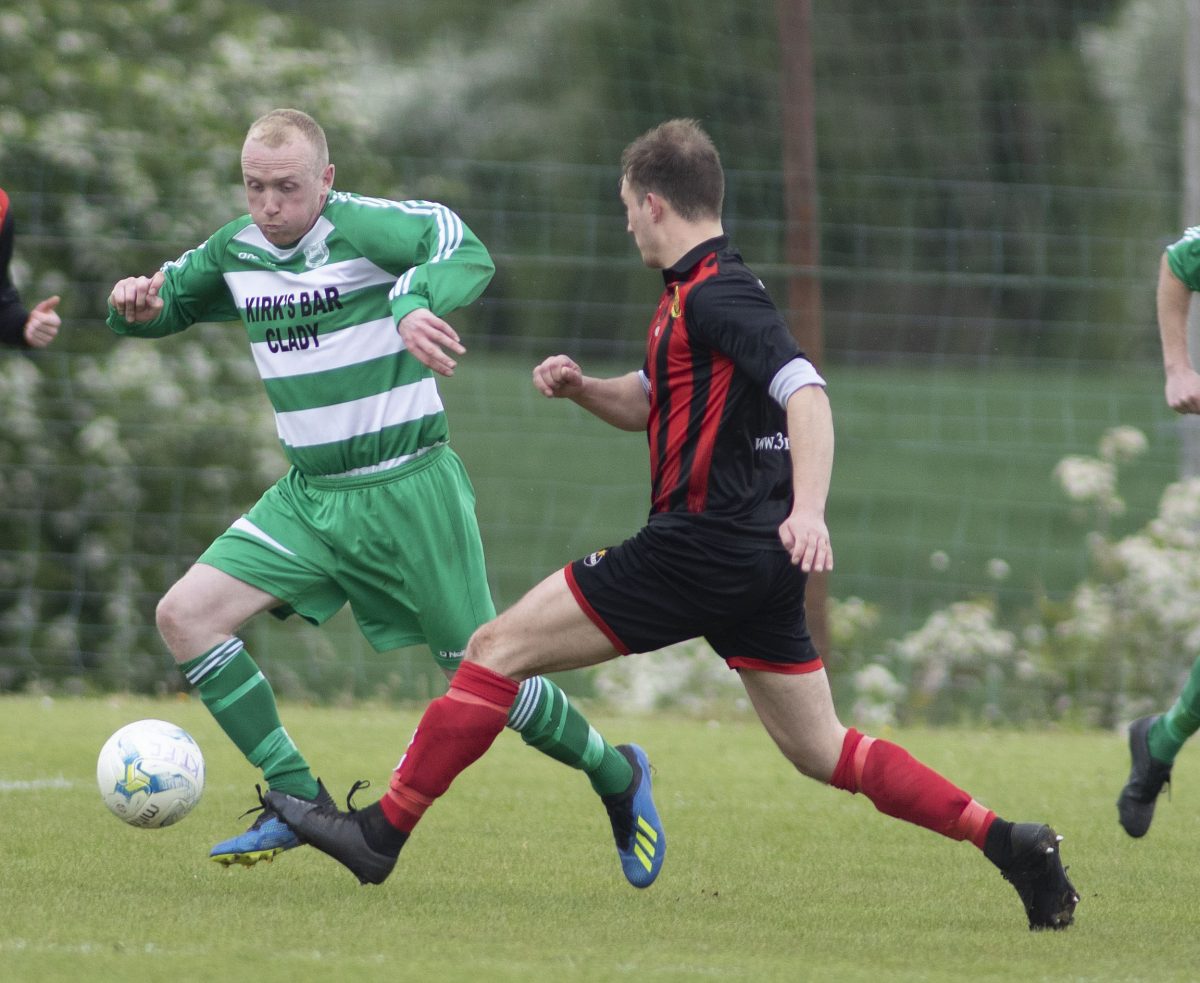 With the weather warnings forcing a blanket postponement on Sunday, the action in the Donegal League over the weekend was confined to the Saturday divisions.

In wintry conditions Glenea Reserves picked up another three points with victory over an understrength Milford side.

Glenea started strongly and took the lead on 5 minutes when Gerry Maguire fired home from close range. The home side continued to press but failed to add to their tally despite the best efforts of Nathan O’ Brien, Michael McHugh and Christopher Barrett.

Glenea finally extended their lead on 35 minutes when Michael Mc Hugh drove into the box and slid the ball home. In the 2ndhalf Glenea started well and added to their tally with two more quick goals from Michael McHugh. His 2ndgoal came on 50 minutes when his effort from the edge of the box took a deflection to wrong foot the Milford keeper and he completed his hat-trick on 52 minutes when another shot from the edge of the box found the corner of the net.

Glenea went close to adding to their tally again but had to wait until 72 minutes when Christopher Barrett added a fifth goal from the penalty spot after being fouled. In tough conditions it was team performances from both sides. Referee: Sean Ferry.

Keadue Rovers Reserves versus Donegal Town Reserves ended level at Central Park in a top of the table clash in what was an overall scrappy affair.

Conditions were poor throughout with drizzle and a strong crossfield breeze. The visitors were brighter at the start with the first chance falling in the seventh minute to Sean Kennedy who’s shot skimmed the crossbar. They remained slightly on top and had another few half chances in the twelfth and eighteenth minutes. Keadue started to get into the game after twenty-five minutes, pushing forward regularly.

Donegal Town had another chance on thirty-seven minutes when their midfielder shot over from 25 yards. Shortly after that Hugh Moy’s free-kick for Keadue was blocked and Michael Greene’s shot from distance went over the bar. The home side did end the first half well. It was 0-0 at half time. At the start of the second half Keadue were much brighter and a Jack Doherty shot was blocked on fifty-two minutes.

The game now had a quicker pace about it than in the 1st half with the home side getting on top. Donegal Town though had a couple of half chances within two minutes of each other but neither threatened the Keadue keeper. The home side took the lead on sixty minutes following a good spell of passing and a good pass over the top from a free kick led to Peter Mc Gee taking the ball down, going past the keeper and stroking home from the tightest of angles. The visitors were back into the game quickly though, getting a good bit of possession, but again not getting any joy from the home defence.

Keadue made a few substitutions and were good up front when they broke away with possession. On seventy-five minutes, sub Ghazi Jichi came close to levelling matters but his shot was saved. On seventy-seven minutes Peter Mc Gee was close to making the game safe but hesitated just in front of goal and the keeper saved. Donegal Town kept coming forward but it looked like Keadue would hold on for a big win.

Two minutes from the end the visitors were level when a good cross from the left was poked in at the far post by Ghazi Jichi to make it 1-1 which is how it ended.Overall, an average affair with the visitors the happier with the result. Best for Donegal Town were Sean Kennedy and Aaron Slevin while best for Keadue were Hugh Moy, Peter Mc Gee and Malachi Boyle.Referee: Brian O’Kane.

The second game of the season between the sides saw a battling display at the Letterkenny Community Centre.

The game started in a fast frenzy fashion before both sides settled down and created chances. Glencar took the lead when a long ball into the box wasn’t dealt with and after a scramble the ball was turned home. They could have had a second soon after but Gibson produced a fine save.

Oldtown battled away and drew level when a Ciaran Gibson header was turned home by Sean Cleary. Shortly afterwards Gibson hit the post from a similar position with a header. They game turned when a wonder-strike from 35 yards from Luke Nelis hit the top corner. After the break both teams freshened up but it was Oldtown’s subs that had the greater effect. Within a few minutes of coming on Tommy Mc Laughlin turned his man and fired into the corner from outside the area. G

lencar had a few chances to pull a goal back but Rory O’ Gorman glanced his header just wide from a corner. Mick Hawe added a 4th from the spot after Ryan Tyrell was brought down. Glencar pushed to get back into the game but Oldtown held out. Team performances from both sides with Chick McLaughlin, Luke Nelis and Ciaran Gibson standing out for Oldtown.

Ballybofey United pushed themselves into a mid-table berth with a comfortable win over Copany Rovers at Dreenan on Saturday. They could have been out of sight within the opening ten minutes but slack finishing meant they had to bide their time to get into a winning position.

Rory Mulligan opened the scoring for the Ballybofey side and it remained 1-0 until the interval. Conor Doherty got his second in two weeks to extend the lead while Keenan Browne completed the scoring with the last attack of the game. Copany tried hard throughout but without threatening the host’s superiority on the day. Referee: Diego Rainey.

NOTE: Due to the adverse weather conditions all matches scheduled by the League for Sunday 8thDecember 2019 were postponed.