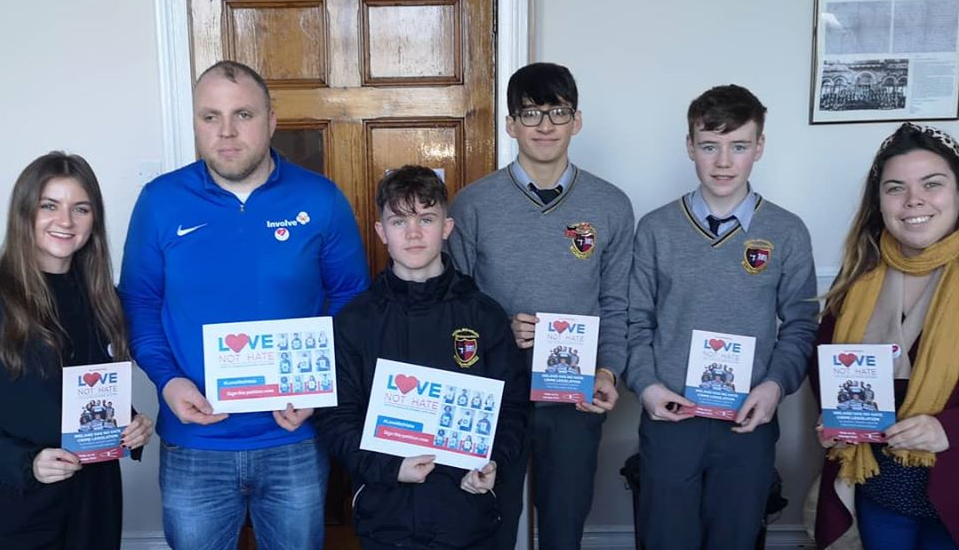 Donegal Travellers Project & The Building Intercultural Communities Project will be campaigning in locations around Letterkenny today as they call on the government to introduce hate crime legislation.

Today is International Human Rights Day, and it will see DTP and The BIC Project hosting information stands and petition signings to promote a #LoveNotHate campaign.

The groups want to help break the silence on hate crime in Donegal, encourage people to report racism, and other hate attacks, and to find effective ways to address it.

They will be in various locations throughout Donegal including Letterkenny Shopping Centre, The LYIT and the Public Service Centre to inform people about the need for hate crime legislation, and to ask people to sign the #LoveNotHate petition to the Minister For Justice and Equality, who has the power to enact legislation.

The Student Councils in St Eunan’s and Errigal College will also be promoting the Love Not Hate Campaign amongst secondary school students.

This action has been initiated by the European Network Against Racism (ENAR) Ireland.

The message is: “We must break the silence on hate crime, encourage people to report it, and find effective ways to address all forms of racism and prejudice.”

Shane O’Curry, director of the European Network Against Racism Ireland  said the 30-year-old hate-crime legislation was “wholly and unacceptably inadequate” and failed to deal with the “serious harm” racism did.

“We see people who stop going out, who leave jobs and schools, stop going to certain places – all because of racist abuse,” said Mr O’Curry.

Ireland has no hate crime legislation. DTP want the government to take the next step, and protect those among us who are perceived to be different because of their skin colour, ethnicity, religion, sexual orientation, gender identity, age, physical, intellectual, mental abilities and so on.

This project is supported by the EU’s PEACE IV Programme, managed by the Special EU Programme Body (SEUPB). Match funding for this project has been provided by the Executive Office in Northern Ireland and the Department for Rural and Community Development in Ireland.