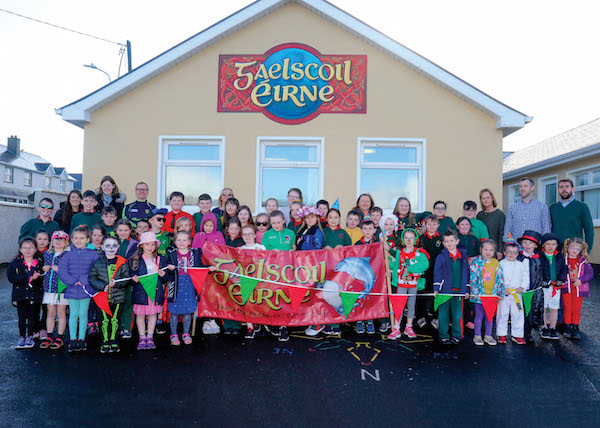 Donegal listeners spoiled for choice on RTÉ RnaG this Christmas

Áine Ní Bhreisleáin will be raiding the RnaG archives in Donegal to bring us two special programmes over Christmas.

On St Stephen’s Day, Áine will explore Christmas traditions in times past in Donegal in An Nollaig i dTír Chonaill at 11 am.

Then, on Monday 30 December at 11 am she’ll bring us the programme Slán le Gabhla. It’s more than fifty years now since the national school on Oileán Ghabhla, Gola island, closed its doors, hastening the abandonment of the island and most of the families had left by 1970.

Many of them have been interviewed on RTÉ Raidió na Gaeltachta over the years about their memories of the island, their lives there, and the sadness of coming to live on the mainland, and we’ll hear some of those recordings in Slán le Gabhla.

In Ár bPéire on Friday 3 January at 11 am, Dónall Mac Ruairí speaks to Áine Máire Uí Néill and her husband Domhnall about their adoption journey. Áine Máire and Domhnall adopted a boy and girl, a brother and sister who had never met, to create their unique family of four. The couple is based in Belfast, but would be well-known too in Loch an Iúir where they spend time each summer, with Domhnall working as principal of Coláiste Mhuire summer college.

There was once a very strong tradition of the card game 25 in Ireland, and on New Year’s Day at 11 am, Dónall Mac Ruairí explores how the tradition stands today with it in the programme 25. He joins Séamus Ó Fearraigh, Daniel Ó Rabhartaigh, Connie and his brother Dinny Mhary Mhicí Ó Gallchóir, Seán De Búrca and Dinny Dhónaill Ó Domhnaill at the last night of the season at the card school organised by Colm Mac Ruairí in Cúl an Chnoic in Na Rosann for many years.

Dr. Johnny Duffy, from Árainn Mhór Island, has lived a very interesting life, and he is interviewed by Edel Ní Chuireáin on Thursday 2 January at 11 am in Croí Árainn Mhór – Scéal an Dr Johnny Duffy. Johnny left the island to attend secondary school in Coláiste Éinde in Galway, and qualified as a doctor in UCG. He spent time working in medicine in Ireland, in London, in the Mayo Clinic in the US, and in the Middle East, before returning to Galway city. Tune in on 2 January to hear more.

Those with an interest in literature may be interested in the series Saol agus Saothar Deichniúr Údar Gaeilge, which will be broadcast over Christmas, focusing on the life and work of ten Irish-language authors. Of particular interest to those in the northwest will be the edition on writer of renown Seosamh Mac Grianna on Friday 27 December at 1.30 pm. Another life of another member of the same well-known literary family, Séamus, who died fifty years ago this year, will be the focus of Séamus Ó Grianna 1889 – 1969 on 31 December at 11 am.

Canúintí is a four-part series by Kíla musician Rossa Ó Snodaigh, focused on Irish-language dialects, particularly those in Gaelscoileanna. For this series, he spoke to children and teachers in four different schools, and compared their dialects to the traditional dialect in the area in English and Irish. On Friday 27 December at 6.30 pm, we’ll hear how he got on in Gaelscoil Éirne in Ballyshannon.

pictured at the Sruth na Maoile @ 25 concert in glór in Ennis, to celebrate 25 years on air for radio programme Sruth na Maoile, a co-production between RTÉ Raidió na Gaeltachta and BBC Radio nan Gàidheal. The concert was broadcast live on both channels, and featured some top traditional and folk musicians.

Other festive highlights include the two-part Bráithre an Cheoil on 26 and 27 December at 5.05 pm, about three legends of traditional singing, Seán ‘ac Dhonncha, Séamus Ennis and Joe Heaney, three fast friends, all born in 1919. Listeners can hear a special end of year edition of popular podcast Beo ar Éigean on Saturday 28 December at 11.08 am, where friends Áine Ní Bhreisleáin, Sinéad Ní Uallacháin and Siún Ní Dhuinn talk about the ups and downs of life. The gala concert Sruth na Maoile @ 25, featuring a stellar list of musicians including Scotland’s Karen Matheson and Donegal’s own Moya Brennan, will be broadcast on Monday 30 December at 7 pm. Maidíneach Chnoc Mheilearaí on 1 January at 12.08 pm will bring us an interview with Fr Uinseann Ó Maidín, one of only ten Cistercian friars left in Mount Melleray Abbey in Waterford.

Further information on the Christmas schedule can be found at www.rte.ie/rnag