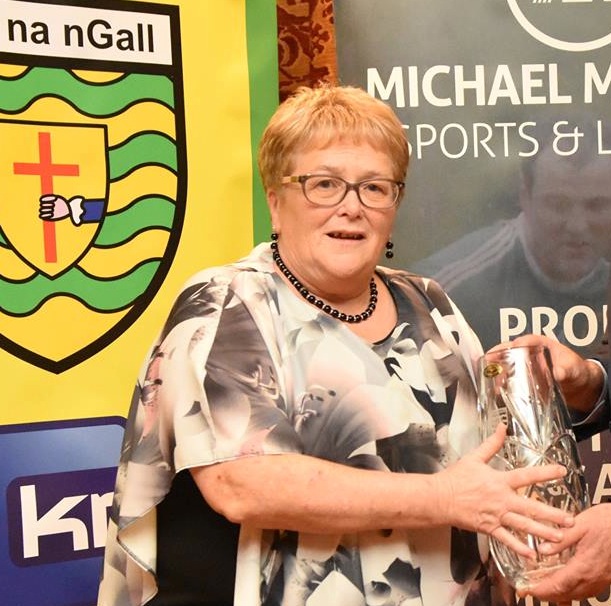 AIDEEN GILLEN delivers her fifth and final report as the Donegal GAA secretary at this evening’s annual convention and the Dungloe woman has touched on several issues in a lengthy submission.

In her report, to be delivered to club delegates at the convention at Jackson’s Hotel in Ballybofey.

One of the prevailing themes – something that has been a feature of previous reports – is club football; its present and future.

“Our clubs find themselves with fewer volunteers,” Ms Gillen writes.

“…and as an Association that always prided ourselves in looking after our youth we must ask ourselves are we giving the proper guidelines, education and direction to our young members in the ever changing environment that is Ireland today.”

The outgoing secretary says that the preparation needed to put out county tams has increased massively. She highlights the increasing financial commitments and the demands made on club players.

With inter-county players needing to ‘give total commitment;’ to the county set-up, she feels that clubs are being ‘deprived’.

She writes: “This is a problem that has to be addressed and I feel county players should be more readily available for club league games.

“I feel that all players should be available for club league games a maximum of 13 days prior to county championship fixtures and as per rule players who are not included in the inter county panel of 26 should always be available.

“Clubs and in particular supporters should be able to see the top players in the county in the club games throughout Donegal.”

The suspensions related to their support for a club mentor who sought to have a 12-month ban – given for playing an overage player in a game – reduced.

“This suspension caused great distress to me and my family when I as Runai signed the letter in good faith to help a member from the county,” Ms Gillen says in her report.

“Most of the interaction was done on my phone when at a charity fund raiser in Dungloe on a Friday night. At the time I did not know what body imposed the suspension and I regret that I got the Chairman of the Hearings involved.

“There are many lessons to be learnt from the episode and I feel that minutes of all sub committees should be forwarded to Runaí Bord na Condae after each meeting. I do not wish to comment further on the matter.”

The outgoing secretary expressed a fear that new rule changes will add pressure to referees, adding: “While the top inter county games will always be the best and fittest referees with officials in contact with mikes and earpieces the same might not be the case at our club under age and adult games who are asked to make the big calls on their own.”

There is also a paragraph on what she feels could be ‘very serious implications’ for the GAA should a no-deal Brexit become a reality.

“We will risk having a shock to our economy which will seriously affect cross border trade and to our collective prosperity,” Ms Gillen says.

“We in Donegal along with the other border counties want a continuation of free movement for our communities, clubs and people and for the rest of the people of our island.

“The older amongst us only too well know of the frustration and bother as well as harassment people had in crossing the border for travel and in particular going to Gaelic games.”

Declan Martin, who vacates the assistant secretary’s post, is the sole nominee to replace Ms Gillen as the county secretary.

The Naomh Muire clubman has completed a five-year term as assistant secretary, but there are no nominees to replace him in a role that also carries the weight of being secretary of the competitions controls committee, i.e setting the fixture list.

Seamus Ó Domhnaill steps down from the role of Central Council delegate, with five nominees there. Former County Chairmen PJ McGowan and Sean Dunnion have been put feared, as have Gary Duffy, Liam McElhinney and Ed Byrne.

Duffy has indicated that he is not seeking re-election as the children’s officer and there are no nominees for that position either.