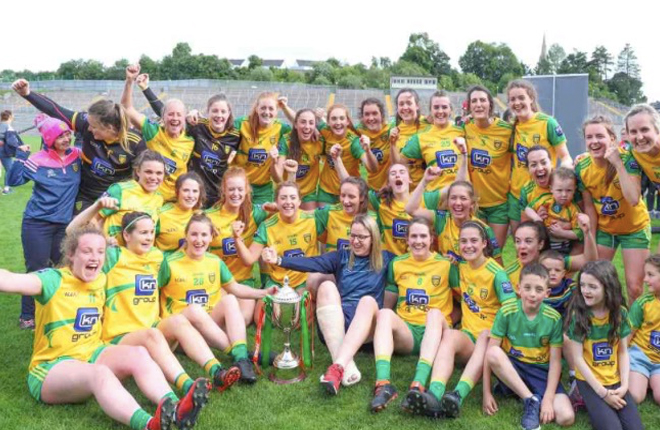 THE groupings have been decided for the 2020 TG4 Ulster Ladies Senior Football Championship – with holders Donegal pitted against Down and Tyrone.

Donegal captured an historic three-in-a-row in the province in 2019 – and have their sights set on claiming a fourth successive title.

In a new format, the Ulster Championship will be run off on a round-robin basis, with three teams in each of two groups, before the semi-finalists are determined.

Donegal are in Group 2 alongside Down and Tyrone, with 2019 runners-up Armagh, Cavan and Monaghan in Group 1.

The top two finishers in each group will progress to the semi-finals, with the winners of Group 1 facing the runner-up in Group 2, and vice-versa.

Down, however, will not be eligible to compete in the knock-out phase of the competition, should they finish in one of the top two placings, as their current status is Intermediate Championship.

Donegal and Tyrone are both assured progress to the semi-finals but their finishing positions in Group 2 will be decided by their results in the round-robin phase of the Ulster Championship.

Down have welcomed their inclusion in the Ulster Senior Championship round-robin format, as it will guarantee the Mourne County competitive matches before they enter the TG4 All-Ireland Intermediate series.