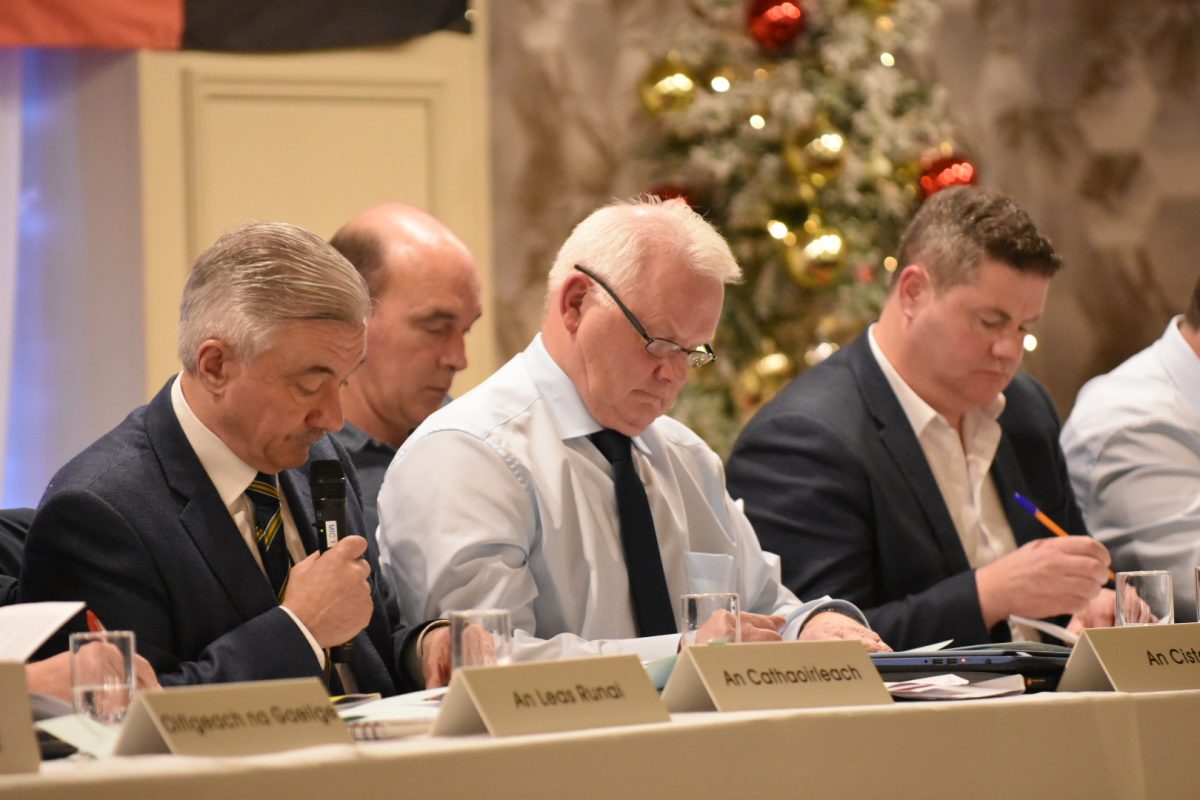 DONEGAL County Board Chairman Mick McGrath took a sideswipe at the GAA’s top brass for their handling of a suspension to secretary Aideen Gillen earlier this year.

In August, the Dungloe woman – who has now completed her five-year term as secretary – and the Chairman of the County Hearings Committee, Dan Hartnett, received eight-week suspensions.

Appeals against the suspensions failed.

The suspensions related to their support for a club mentor who sought to have a 12-month ban – given for playing an overage player in a game – reduced.

“I have already expressed by disappointment at the way Croke Park treated an admission of administration mix-up, with a heavy-handed approach, and to treat a voluntary officer in such a fashion was not acceptable,” McGrath (pictured above by Geraldine Diver) said at tonight’s annual county convention in Jackson’s Hotel, Ballybofey.

“Her report is a record of events in 2019. It is factual, informative and outlines many areas of record that has occurred this year. Thanked her for services to the association over the past five years.”

Ms Gillen, in her own report tp convention, said the suspension had cause her and her family ‘great distress’

“I as Runai signed the letter in good faith to help a member from the county,” Ms Gillen said.

“Most of the interaction was done on my phone when at a charity fund raiser in Dungloe on a Friday night. At the time I did not know what body imposed the suspension and I regret that I got the Chairman of the Hearings involved.”

McGrath reflected on a year that ‘brought great joy to our association as our senior footballers led the way with winning back-to-back Ulster titles.’

The Aodh Ruadh clubman paid tribute to his fellow executive members and to the various strands of the GAA in the county.

McGrath outlined the importance of the Win A House In Dublin draw, which is offering a house in the capital as top prize in a draw, with €100 tickets on sale at the moment.

He said: “The largest fundraiser ever undertaken in our county is currently underway and I ask you all to support this effort. This effort is your effort. This organisation is your organisation. This Donegal is your Donegal.

“We shall move into our new Donegal GAA Centre in Convoy in 2020, but there is still much to be done. We really need a person in each club area to lad out on ticket sales and draw awareness over the next few months.

“We need everyone to contact people from their club area who live outside the county to purchase a ticket. Let’s pull together and show our players of today and players of tomorrow that we can build a GAA home to be proud of in Donegal.

“Let’s not be afraid of that challenge, but meet it with the strength that we have.”

He noted that a three-year strategic plan was launched last year and said that the executive was ‘on track’ in each of the six areas: Club development, financial planning, administration, infrastructure, games development and coaching and a voice for youth.

He said: “I have no doubt that it was a fruitful exercise that is already showing healthy signs. It is important that the objectives, specific actions and the progress indicators are monitored and adhered too.”