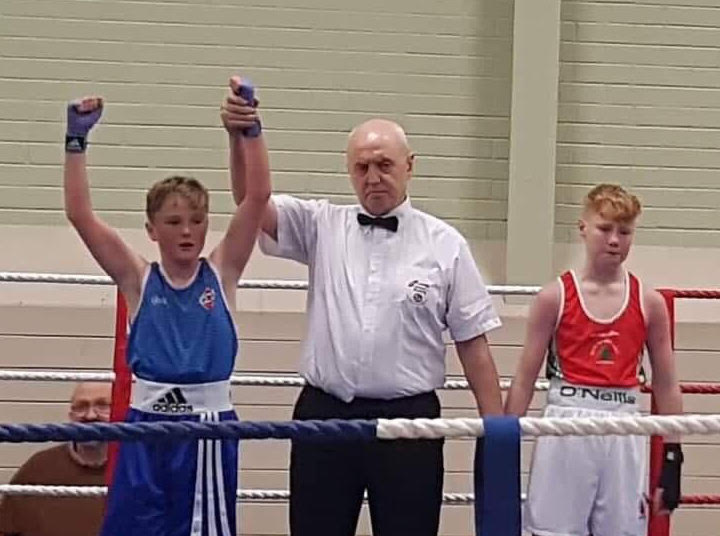 Dunfanaghy ABC’s Luke Kelly and Conan Kearney from the St Bridget’s ABC in Clonmany had their hands raised after final victories.

Kelly claimed a unanimous decision win after a superb display at the Shantallow Community Centre.

Kearney was given a 3-2 split decision against the St Joseph’s ABC, Derry fighter.

Fintan Robertson from St Bridget’s lost to Harvey Cochrane of Castle in the Boy 1, 33kgs final, while Dungloe’s David Tennyson was beaten by Brendan Ferran from Holy Trinity in the Boy 1, 35kgs decider.

Kerry Brown of Convoy was on the wrong end of a 4-1 split in the Girl 1, 37kgs final with Casey McKeown from St Monica’s.

Carndonagh’s Darragh Porter was stopped in the second round of the Boy 2, 46kgs final by Star’s Ciaran O’Neill and Cookstown’s Seamus Maughan had a unanimous decision win against Convoy puncher Pearse McBride at Boy 3, 52kgs.

There was joy, though, for Ballybofey schoolboy Sean Devenney, fighting out of the Oakleaf ABC. Devenney defeated Oisin McCann from St Paul’s on a 4-1 split in the Boy 3, 43kgs final