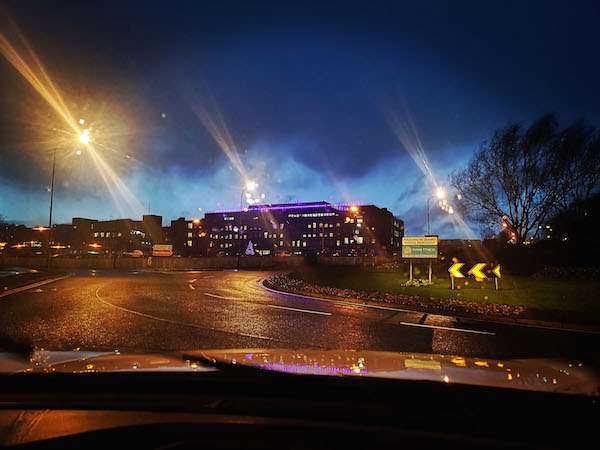 Brian McDaid: When Christmas is not the right time

Christmas is the celebration of the birth of Christ. A new beginning, a new start. We as humans have added on to that celebration and made it a time to meet up and be together and also a time to help others.

One moment you’re looking forward to the joys that Christmas brings, the next moment Christmas can become one of the worst times of the year. This can happen when we lose a loved one through death.

People who have suffered the loss of someone through death, especially the departure too early in their life miss that person every single day of the year, not just at Christmas.

It’s in peoples nature to try and comfort their friends who have suffered this loss, but when they haven’t travelled a personal journey of loss themselves they might mistakenly focus too much on the need to help cheer someone up at Christmas rather than just to be there for them and be prepared to listen.

Christmas has been a battlefield for me for the longest time feeling guilty for what I should be happy to have at this time of year but at the same time feeling sad and just wanting the whole season to pass over so we can get into another year.

The generation before me never published an anniversary notice on the death of my mother, and then when it was our turn we thought about doing something on the 20th anniversary of her death which was the same year that my father passed away.

Now 30 years on and us heading for the 50th and 30th anniversary of their respective deaths its time to do something not alone for both parents but also to remind the four children that were left behind what they came through on that journey.

Over the last 30 years since my father died, things that I had thought had gone forever started to find their way back to the family. The first of these was my mother’s wedding ring which was presented by Hughie Mc Govern the undertaker who looked after the burial of both my parents.

He gave me the ring that he took from my mother’s finger before she went straight from Letterkenny General Hospital to St. Eunans Cathedral on the night before her funeral.

There was no wake in our house with 4 young children all under 5 years old in the house.

His plan was to have the ring for my father if he asked for it, but as things turned out he never did and Hughie could never find the right time to tell him that he still had the ring.

My late aunt Bida shared the enjoyment of getting the ring remembering it and even where it was bought, CT Balls, Letterkenny.

The next thing to arrive was my mother’s old Singer Sewing machine which Monica Murphy gave to me. She had bought it from the Singer Rep who collected the nearly new machine shortly after my mother passed away.

The sight of it sitting at the window in Wolfe Tone Place all folded up where once the rattle of the electric motor filled the kitchen was too much of a memory for my father. After my mother passed away, Monica gave me my mother’s sewing machine when she closed her B&B and Esso Filling Station on the Port Road.

Then when we were getting ready to open our studios on the Back Road a friend from Glencar, Monica Gribbon landed in with an old battered photo that her mother had found over 20 years before that along the roadside. She put it into a box of photos and every Christmas Monica’s family the Mc Dermott’s from Glencar would go through the photos and wonder who the mystery woman in that old black and white photo was. It was their uncle, Pala that made the connection one year up for the Christmas dinner that suggested it might be Fred McDaid’s wife Mary Ellen, and sure enough it was.

This time last year a letter arrived before Christmas from Melbourne, it was from Aunt Margaret, my mother’s sister. Included with her letter to me was a letter my mother wrote to Margaret in 1968.

In the letter, my mother talked about all the things that I had remembered from that time.
And the final link with the past was the colour negative my uncle kept of Fr. Mark Coyle, that never was printed of the four children and their mother in the snow of Christmas 1968.

Last week I brought all of these things together from the days of my mother Mary Ellen which all came back thanks to everyone right through from the McGoverns, the two Monicas, my aunt Margaret and my Uncle Fr. Mark.

My mother and father and myself on our last outing before her death.

This left me with the thought that this was the year to remember my dead relatives on the 50th anniversary on my mother’s passing which will be in January 2020.

Included with her will firstly be will be my two older brothers Eamon and Patrick, twins who died as infants on the 14th of December 1962, my father Fred who passed on the 18th of April 1990 and finally their infant granddaughter, Lisa McDaid who died on the 23th of May 1994.

The old Singer Sewing machine of my mother’s is the symbol we have of her of life which we will have sitting looking out the window of our studio which once was also her studio when it was part of a store where she worked looking out the same window on her mother’s old foot-operated singer which is also still in there.

Even 50 years on I still feel happier feeling sad at Christmas, if that makes any sense to anyone who is going through Christmas for the first time without a loved one.

Everything on the run into Christmas feels the same to me as it always has right down to the winter light and heavy clouds which were summed up perfectly for me on Sunday evening sitting at the hospital roundabout.

Even though the new set of Christmas lights across the front of Letterkenny University Hospital looks very up-lifting, the windows of the hospital at this time of year still remind me of those of mine who have passed away.

Brian McDaid: When Christmas is not the right time was last modified: December 12th, 2019 by Brian McDaid

Organisers of cancer fund are “overwhelmed” by...

My Donegal – with creative designer Meg...

DD Motoring: End of the Line

My Donegal – with Letterkenny mechanic James...