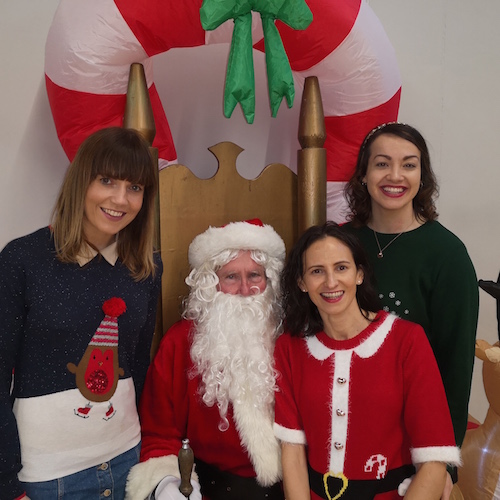 The annual Loreto Letterkenny Christmas Trade Fair was a tremendous success for all those involved.

There was no lack of creativity in the school gym on Tuesday morning!

The tables were transformed into tills were business exchanges occurred between students.

Decorations lined the walls and Christmas music played in the background. Stalls were crowded with colourful Christmas cards, baked goods and homemade designs.

At nine o’clock, the hall was flooded with 1st year students eager to buy gifts and treats for themselves and their friends. The sales began!

Companies raced for customers and began with a whole range of sales techniques, including giving out samples, chatting about their products to the teachers and creating special offers.

Bank of Ireland were present to begin the judging at ten.

The young entrepreneurs stood up straight and explained their business models confidently to the judges.

It was a tight call with all the innovation and hard work that had taken place, but in the end 2nd year students Akshata & Akshara Joha won Best Salespeople on the day.

After the excitement of the hall, coffee and tea was available to adults in the Constance Centre. Mince pies were laid out, ready for eating. A company began to sell delicious crepes, much to the delight of hordes of students, judging by the queues!

Sixth class children from Woodland National School and Scoil Mhuire Gan Smál were ushered in to get their raffle ticket and their glass of orange juice and candy canes. Teachers received a well-earned cup of tea and biscuits for their efforts from the TY students.

At the end of the day students began to close up their companies and return to class. New skills were learnt and the pupils, now seasoned salespeople, will take these skills out into the world.

The experience they have received here is something that will help them as they prepare for exams and in life.

The opportunity to hold this event could not have been possible without the dedication of teacher Ms. Mairead Boyle, business teachers and the wider staff at Loreto Secondary School, Letterkenny. Of course, a huge congratulation to all students involved in the organisation and the companies in the trade fair.