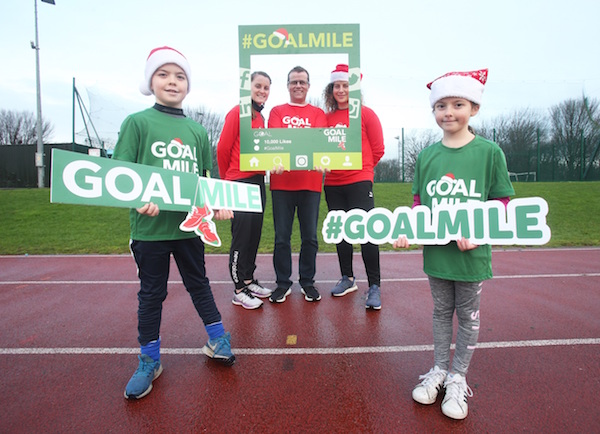 Two Donegal locations pencilled in for the Goal Christmas Mile

A record number of people are expected to take part in Ireland’s favourite festive fundraiser, the GOAL Mile, which takes place in 2 locations in Donegal and over 130 locations over the Christmas period.

Now in its 38th year, the GOAL Mile is one of Ireland’s largest and longest-running annual fundraising events and organisers revealed today that they are expecting a record number of people to take part this year. Organisers have emphasised that people just need to turn up on the day to take part, then choose to walk, run or jog the mile.

The GOAL Mile is steeped in tradition for people who build in a GOAL Mile as part of their Christmas routine and this year new GOAL Miles have been added around the country. For example, Ciara Mageean has set up a new GOAL Mile in her hometown of Portaferry, Co. Down to raise funds for GOAL’s work in 13 countries around the world.

Last year GOAL reached more than 5.5 million people in need, helped by the €250,000 raised from the 2018 GOAL Mile. GOAL’s work includes supporting those displaced by the ongoing conflict in Syria; running nutrition programmes saving the lives of infants under six months in refugee camps in Ethiopia and providing ongoing emergency response to thousands of people affected by Cyclone Ida in Zimbabwe.

Speaking at today’s GOAL Mile launch, Ciara Mageean said she is delighted to be out of the starting blocks ahead organising an event in her hometown.

“The GOAL Mile is part and parcel of the Christmas season for people all over Ireland and I am so excited to bring that to my hometown this year. The combination of the Christmas spirit and the act of goodwill creates the best atmosphere and I urge people to join their local GOAL Mile this year. There is no better way to get Christmas Day started and to build up an appetite for the turkey – or to work off the eating excesses on the following Day!”

Writer Paul Howard, aka Ross O’Carroll Kelly, said: “I never miss the GOAL Mile, Christmas would not be the same without it. There are so many wonderful things that define Christmas and the GOAL Mile is one of them for my family. I want people to find out where their nearest GOAL Mile is, take the time to head along and donate what they can to GOAL. Make this your new Christmas tradition – you’ll feel the better for it when you’re tucking into the Christmas pudding and selection boxes.”

GOAL’s Senior Development Manager, Alan Vard, said, “The GOAL Mile is a very special tradition for families and communities over the Christmas period. It is a lovely way for people to come together, have some exercise and fun and raise money for a great cause at the same time.”

“Thanks to GOAL Mile organisers, millions of euros have been raised to support GOAL’s work in the developing world since the first Mile was staged in 1982. The beauty of the GOAL Mile is its simplicity. People don’t need to register in advance but simply show up to their nearest event, run or walk a Mile and contribute whatever they can afford to GOAL on the day.”

Loreto Milford will also be organising their own GOAL Mile this year to raise funds for GOAL.

All GOAL Miles are listed at goalmile.org with dates and times. You can also get a free GOAL Mile 2019 t-shirt by registering for the GOAL Mile in advance.