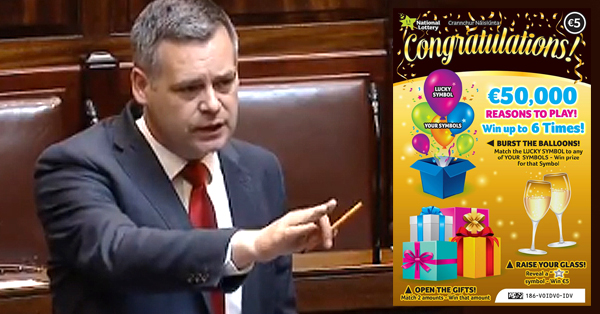 What are the odds? Doherty claims scratch card errors don’t stack up

Donegal Deputy Pearse Doherty is calling for the books to be opened and investigated at National Lottery Headquarters following revelations of a scratchcard error emerging this week.

The lottery has apologised after four jackpot prizes worth a total of €180,000 were left out of three scratch card games in recent years.

The mistake, which has been described as a ‘human error’, led to four of the top prizes not being included in the scratch card games ‘Congratulations’ and ‘Diamond Bingo Doubler’ since 2014.

Sinn Féin’s Finance spokesperson Pearse Doherty has been doing calculations and found that the odds of it being the top prize that was missing in each of the games is 1 in 167 billion billion.

Speaking in the Dáil today, Doherty said an independent investigator should be appointed to go to the offices of Premier Lotteries, as provided for in legislation.

“The fact that four jackpot prizes across three games operated by Premier Lotteries were missing due to ‘human error’ or some improbable misfortune is hard to believe.

“In one of these games, the number of prizes in the game was designed to be no less than 976,500. The probability that, out of all the prizes, the jackpot prize would be missing is nearly one in a million.

“The probability that out of all the prizes, that four jackpot prizes across three games would be missing is of the factor of 1 in 167 billion billion.

“The numbers don’t stack up, and questions need to be answered by Premier Lotteries, by the Regulator and by the Government.”

The Donegal TD called for immediate action on the matter: “Under legislation, Premier Lotteries can write their own code of conduct and have it rubber stamped by the Regulator. This legislation must be fixed to provide for more robust oversight.

“Secondly, the legislation provides for an investigator to be appointed to go to the offices of Premier Lotteries and open their books and I am calling for that to be done immediately.