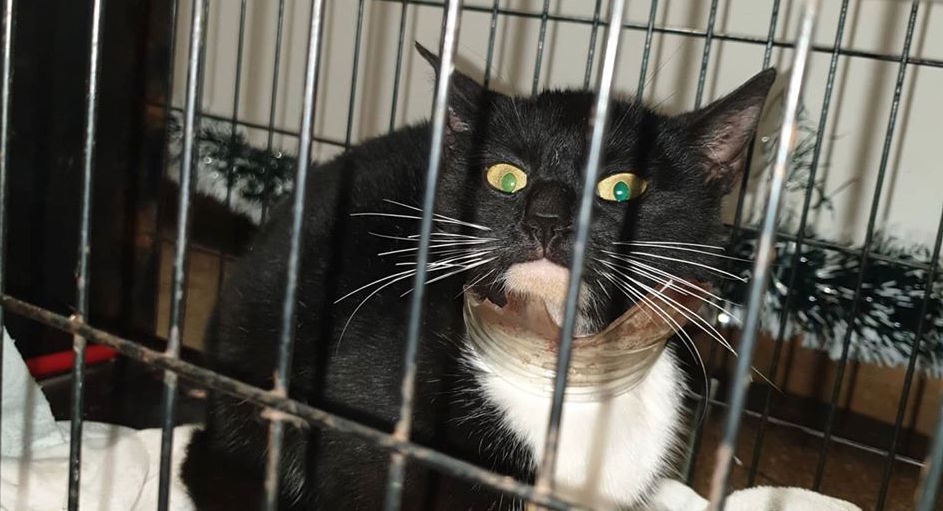 Cat is ‘feline’ lucky after miraculous escape from glass jar!

A cat had a miraculous escape after getting its head stuck in a glass jar – for FIVE days.

The cat was spotted in Ardara with the glass jar on its head.

It is thought the cat stuck its head into the jar to get the remains of some food but ended up getting stuck.

A local woman tried to get the jar off the cat but it jumped onto a fence before falling and smashing the jar.

However, the remains of the glass jar stayed stuck on the cat’s neck.

The cat was caught and brought to local charity Animals in Need who managed to get the remainder of the jar from the moggy.

The brave woman who found the cat even got a scratch for her troubles but was delighted to save the cat.

A spokesperson said the cat had to be sedated and the operation to remove the remains of the glass jar was very delicate.

“She was so lucky. One wrong move could have been fatal. She had the tiniest wee nick from the edge of the jar and that was it.

“The big worry was getting the jar off without causing her any damage. If it splintered and cut her or it was too hard it could have caused her even more damage.

“She’s back to herself now and is really enjoying her food,” said the spokesperson.

The Animals in Need volunteer also appealed to people not to throw away jars, bottles or cans.

“For a starving cat, the temptation of a lick of leftovers clearly proved too much.

“Please make sure that jars and cans are disposed of safely and that cans crushed and jars washed and placed in closed recycling bins,” she added.