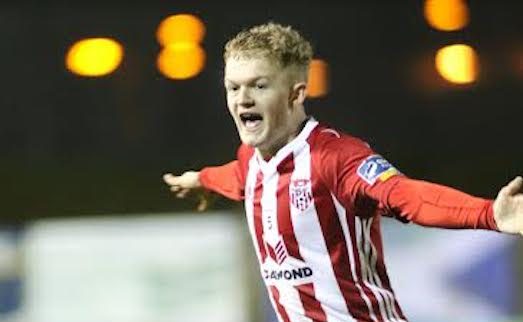 DONEGAL man Adrian Delap is to make a loan move to Finn Harps, who have also confirmed that Mark Coyle is remaining at the club for the 2020 season.

Delap scored one of the goals for Derry in last season’s 3-2 win over Harps at Finn Park, but the player found game time hard to come by.

The pacy winger, however, sees a chance to make a mark at Harps and the Ray native will spent the first six months of 2020 in Ollie Horgan’s squad.

Last year, then Derry manager Kenny Shiels handed Delap a new three-year deal at the Brandywell, but the 21-year-old found himself down the pecking order in 2019.

Harps have confirmed the retention of midfielder Coyle.

The Burt man played for Harps’ U19s before playing for Cockhill Celtic. However, he played a big role in 2018 and 2019 at Finn Park and made 27 appearances in the season just gone.

“There was definitely a learning curve,” Coyle said.

“Some games you’d feel like you played really well and then other times you’d feel a bit out of your depth.I think if I took out a couple of the cards and maybe kept possession a bit more and added a goal or two that’d be the next step for this season.

It was fantastic to keep the club in the Premier and hopefully we can kick on from here.”

Horgan is delighted to have Coyle back in Ballybofey.

The Harps boss said: “He’s done well to come in with very little League of Ireland experience and play a big role over the past two seasons.

“He’s not afraid of a challenge and he’ll run all day for you which is definitely important in this league. He’d be the first to tell you he still has areas to work on but we’re very happy to have him signed up again for next year.”