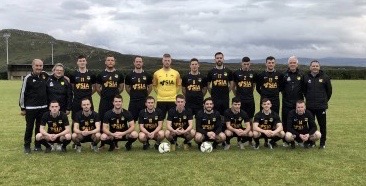 SHANE Byrne says Christy Fildara is excelling in his new-found central role as Glengad United enjoy the view from the top of the Jackie Crossan Premier Division.

The attacker scored twice yesterday as Glengad recorded a 4-0 away win at Illies Celtic to ensure they take a narrow one-point lead into the festive break.

Fildara spent a short time at Derry City before returning to Glengad. Having cut his teeth as a winger, Byrne has deployed Fildara in the number 10 role to great effect of late.

“If you saw them at any game of football at any standard you’d be saying: ‘What a strike’. Christy has improved big time since he came in and started to play as a ’10’. He was outstanding.”

Although they ran out 4-0 victors, Byrne wasn’t totally pleased with his side’s showing.

He said: “We were missing players and that brought a bit of edginess into it. There is room for improvement. We were quite and the organisation wasn’t as good as it usually is. But not many sides will come up here to Illies and score four.

“There is a lot of football still to be played.”