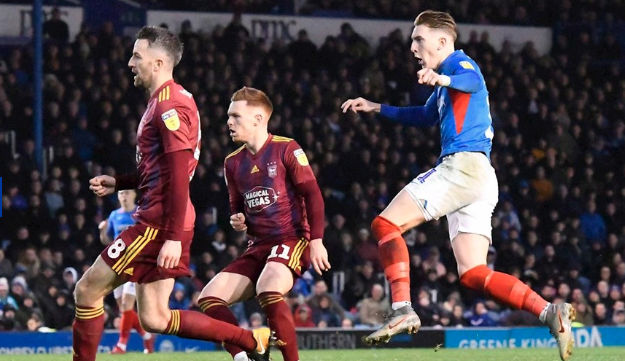 RONAN Curtis insists he is happy at Portsmouth, although the St Johnston man is expected to have no shortage of suitors once the transfer window opens in January.

Curtis bagged his sixth goal in seven games yesterday to give Portsmouth a 1-0 win over Ipswich.

The in-form Curtis has found the high gears again in recent weeks with the former Derry City man already having been linked to a number of Championship sides.

“I love living in the city and I love the club.

“The gaffer (Kenny Jackett) gave me a chance by signing me here and I’m happy to have been able to pay him back.

“I’m not worried if any transfer comes in, if I go, if I stay, contracts or whatever. I’ll just focus on myself and my own game and I’ve just got to carry it on now.”

Curtis drove home four minutes into the second half and the strike from the Republic of Ireland international was enough to give Pompey the win.

A Christmas cracker from Ronan Curtis gave @Pompey all three points against Ipswich! 👊