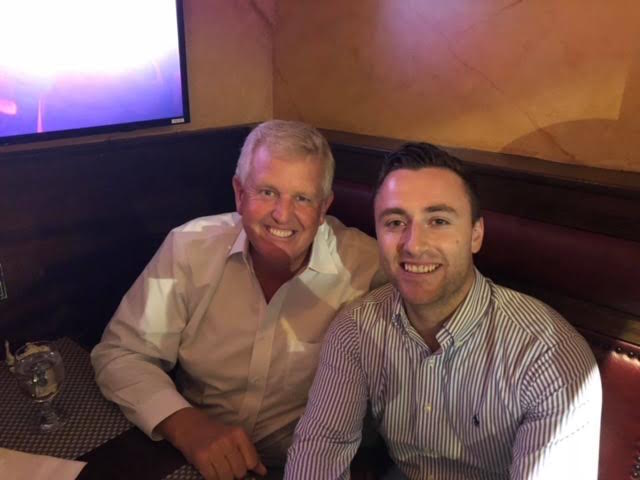 A young Letterkenny man is following in the footsteps of many of his fellow county men who have gone before him and is making waves in the business world in the US.

This year has been an extremely busy one for Patrick ‘Packie’ Kennedy.

Things move fast in the bar and restaurant trade and after a series of moves, Packie has found himself not only working in the trade but now having a partnership in some of those businesses.

The Rahan man, a son of Doreen and Cyril Kennedy, has always had the travel bug.

He moved to London a number of years back and then on to Philadelphia before moving to the city that never sleeps, New York.

Packie had previously worked in Letterkenny club Voodoo and the connections he made there came full circle when he ended up working for a former colleague.

Seamus McNulty, from Gaoth Dobhair, ran the Punch and Wined Up restaurants in the Gramercy area of Manhattan and Packie worked there before working his way up to General Manager.

Hard graft, the likeability factor and a bit of ambition goes a long way Stateside and just a few months later Packie was signed up by Liverpool FC!

He didn’t actually get to star in the Champions League for a certain Klopp but he did get the call from another legend, Jamie Carragher.

Carragher runs his self-named bar in Times Square and Packie soon found himself installed as the General Manager at the 8,000 square foot venue.

He helped grow Carraghers into the biggest soccer bar in the US and the night Donegal Daily called, there was an incredible buzz in the bar which is staff by many young Irish.

Time waits for no man and no Packie and his partners are expanding.

They have just opened two more substantial properties in Philadelphia.

One is called The Ridley House in Ridley, PA and the other will be known as Media’s Towne House in Media, PA.

Packie will be the Director Of Operations and also has a partnership in both ventures.

Brian Mc Laughlin from Dromore in Co Tyrone, who moved Stateside 25 years ago, is the owner after he too rose through the ranks.

“I’m excited to see what we can do,” says Packie.

If his rise up the ranks of the hospitality industry so far is anything to go by, it won’t be long before another venture or two is on the cards for this ambitious young Donegal man.

Men jailed for having articles with intent...