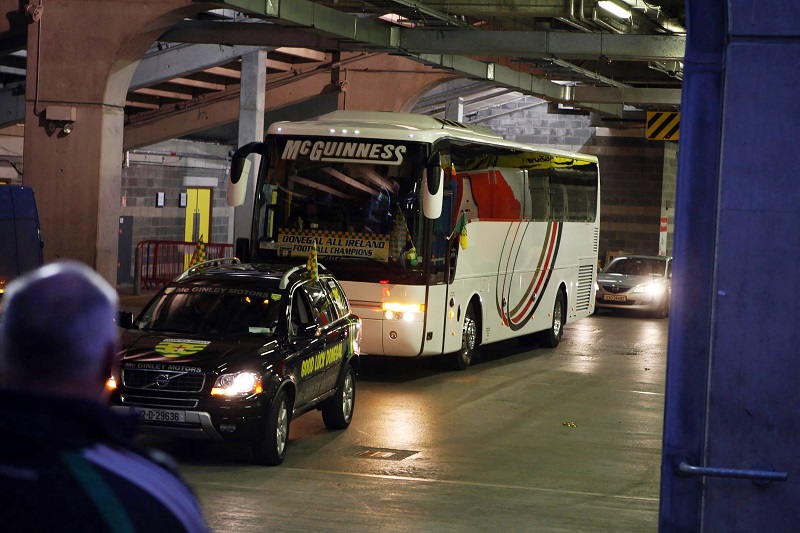 DD Motoring: A bus man’s journey – in memory of the late Jim McGuinness

Following the sad passing of Mr James (Jim) McGuinness Snr of Glenties on Christmas Day, columnist Brian McDaid shares his memories of Jim on the road and some of his proudest moments.

There was a photo I always imagined taking. It would have four elements in it and a story to tell, I know now for a good few years that the elements of this possible picture have eroded away, but the original story of why I imagined taking it is still the same.

Over Christmas, Jim McGuinness Senior’s final journey in this world came to its final destination after a lengthy illness.

In health, in his earlier years, he will be remembered as a familiar face behind the wheel of his Ford twin-wheel Transit mini bus negotiating the roads of Donegal transporting Glenties folk to and from Letterkenny and other places. It was on these such journeys that I first got to know Jim McGuinness, that was in the 70s when he would call in for fuel to Hegarty’s Auto Services in Ballymacool on his journey home.

That was in an era when transport needed more servicing than today, in a time when people had more time to have a chat, friendships were soon built up.

Jim was one of the many customers that called into Hegarty’s in them days, some just lived out the road a bit, and some who would wonder what the road ahead would be like on a dark winter’s evening and what Meenaroy Mountain would throw up for them, be it fog, be it snow, be it black ice.

Jim McGuinness was one such man who would land in his minibus and would talk about the road ahead on night standing out having a yarn, waiting for you to fuel up his bus, maybe adding a few pints of oil or checking the water in the radiator while he tried to put air in an inside wheel on the back tyre that had a reverse facing valve, that had a long term very slow puncture or leaking valve.

My late father, Fred who worked all over Donegal for the ESB would often ask me in about people that called in for fuel and would proceed to tell you who they were or who their father was or tell you the town-land that they came from.

I remember telling him about meeting the larger than life customer that was Jim McGuinness from Glenties.

My father listened but soon butted in, ‘I know him well’.

My father described a day in an ESB office in Glenties many years before and the ESB rural electrification were putting power into rural homes for the first time and were looking for casual labourers, as he described them, in the area. It wasn’t long before locals were calling looking for work. My father was in the office the day his boss asked his opinion on one of the men looking for work. This man came in for an interview in a pair of winkle picker shoes, a pure white cardigan and a mop of black hair complete with side burns all flicked back, held in place with a good quantity of Brylcreem. ‘Look at the cut of that one’ his boss said looking out the window at him sitting waiting for an interview.

Sure ‘Give him the start’ my father suggested and his boss a Sligo Man, Martin Scanlon, did so and the following day Jim McGuinness started work with the ESB. My father who wore a shirt and tie to work all his life said it was the first time he ever seen what he described then as a ‘Teddy Boy’, and in his youth my father was big into fashion but not as brave to wear that of the style of a young Jim McGuinness wore that day.

My father told me to tell Jim the next time you see him who you are and who’s son you are, but at 14 years of age I didn’t even think Jim would remember his early days in the ESB let alone for me to start and describe to a grown man that his fashion and why he was different was the reason my father put in a word for him to get the start.

Over the next few years working on the pumps I could see flashes of style from Jim as my father had described him, emerging from the mini bus in a long Crombie overcoat and the hair as always groomed back and the whiff of Brylcreem and in later years his tinted glasses.

Long after my father had passed away and Jim’s son was making a name for himself as the Donegal manager. Them memories of years ago came back into my mind and for me was at the All-Ireland in Dublin and covering the final seeing a ‘Mc Guinness’ bus sitting deep in the tunnel in Croke Park was a proud and private moment, and instead of the bus filling with fuel like it did in my days in Hegarty’s and worrying about Meenaroy Mountain they were celebrating in Hill 16 as the bus was filling with joy of a winning Donegal Team heading home.

That evening for others it was all about the team and the Sam Maguire, but for me the bus had as much to play in the journey as anything else had. Three pictures that evening were more about Jim Mc Guinness Snr. than the man of the moment the Donegal manager, his son Jim McGuinness. Jnr.

The first was a picture of the bus itself sitting there and the name ‘Mc Guinness’ across the visor waiting to go on one of the most famous journeys that a “Mc Guinness” bus would go on to complete the whole journey home to Donegal, which was unlike the 1992 winning journey when the Sam Maguire and team made most of its journey to Donegal by train and then by Marley’s Bus, and that year I was there when it arrived at Connolly Station in Sligo to capture the proud team walking down the platform including a very young Jim Mc Guinness in the edge of the picture after they got off the train. 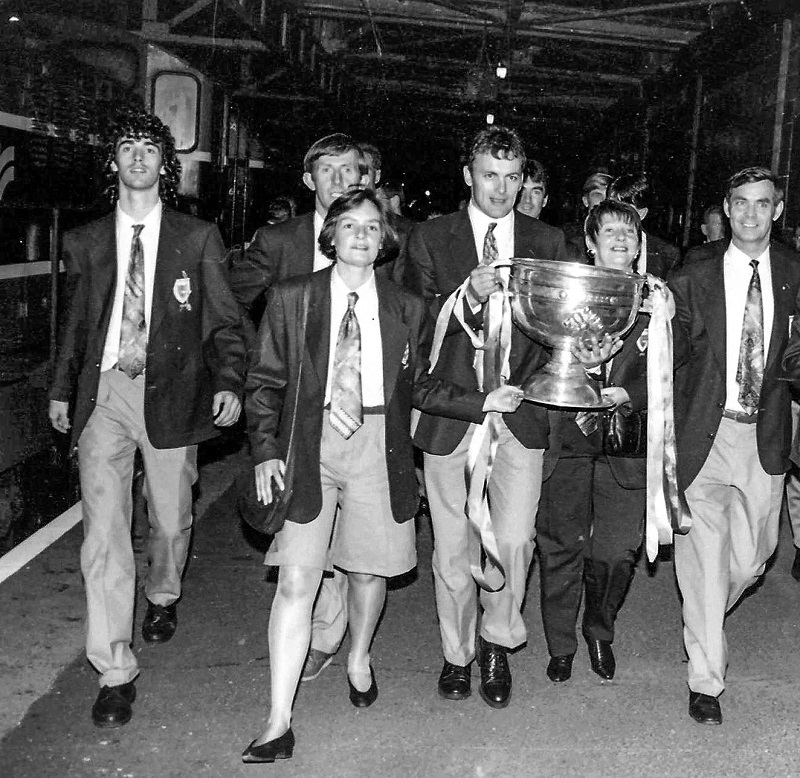 A young Jim McGuinness Jnr as he stepped off the train in Sligo to make the journey home with his f team’s members and the Sam Maguire Cup in 1992. Photo Brian McDaid.

Back to 2012 the second picture that day of Jim McGuinness reaching out the driver’s window of the family own bus to commiserate with the then An Taoiseach Enda Kenny, from Mayo was a powerful image and the cup sitting in the background on the bus. 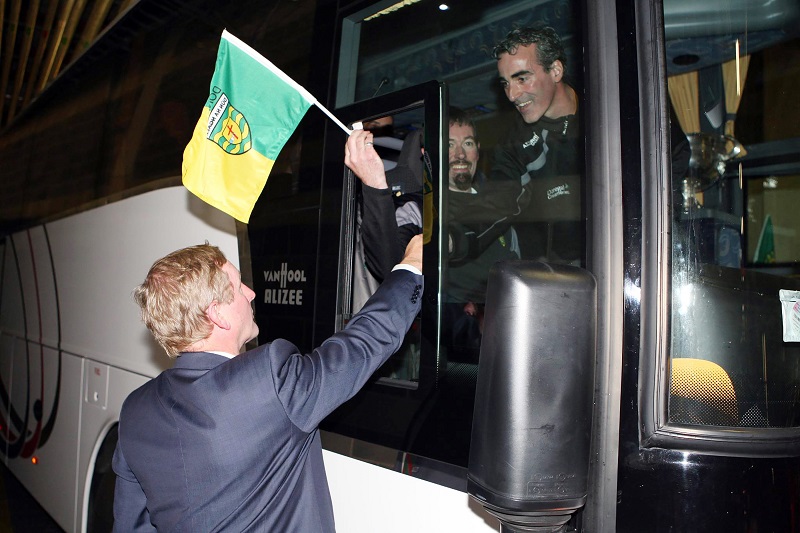 Jim Mc Guinness reaches out the driver’s window of the team bus at Croke Park to shake hands with the then An Taoiseach,Enda Kenny before they depart home from Croke Park before they head home with Sam Maguire on the “Mc Guinness” Bus transporting the Donegal team in 2012. Photo Brian McDaid.

And the third photo was that Jim McGuinness Snr,  grandson a young 15 yrs old Charlie McGuinness with the Sam Maguire Cup and him trying to load it into the carriage area with all the Donegal kit bags. Charlie, the son of Frank McGuinness, called after his late uncle Charlie, was the youngest member of the squad that year was there representing so many parts of the McGuinness family for me that day and was also the future. 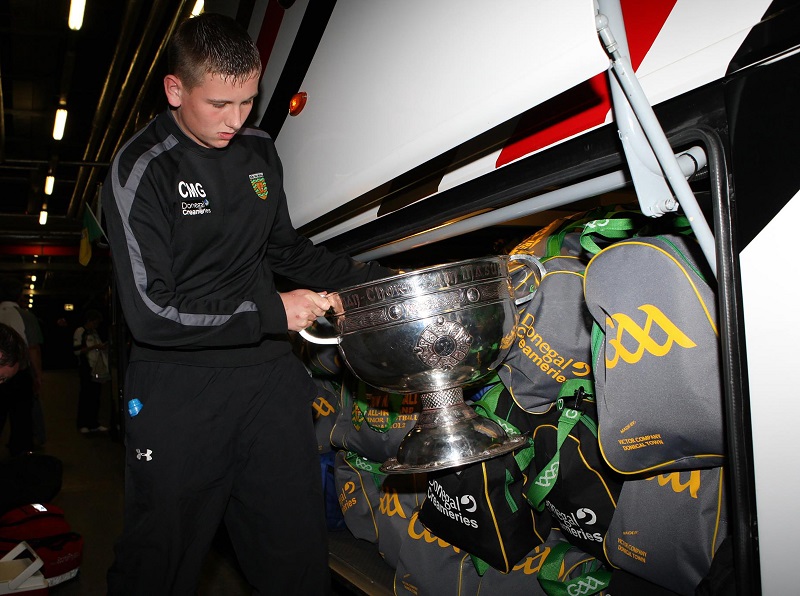 Charlie Mc Guinness, grandson of the late Jim Mc Guinness who started the buses in Glenties pictured as a members of the 2012 All Ireland winning Donegal Team as he packs up the Sam Maguire on his family run bus company for the run home from Croke Park after winning the All Ireland. Photo Brian McDaid.

This week on Boxing Day night I made the journey that the late Jim McGuinness would have made so many times from Letterkenny to Glenties to say a farewell to a friend of both my father’s memory of him and mine. And on that night this week Meenaroy mountain didn’t disappoint, covered in heavy fog making me wonder where exactly on the journey I was on that twisty road over the hill or even what year it was 2019 or 1979 when Jim sat behind the wheel of his mini bus heading for home.

My ideal picture would have been the two Jims senior and junior with the  Sam Maguire Cup and a ‘Mc Guinness’ bus in the background but that never happened. But for me, I’m more than happy to have the memories of the journey of the late Jim Mc Guinness and his road he has travelled.