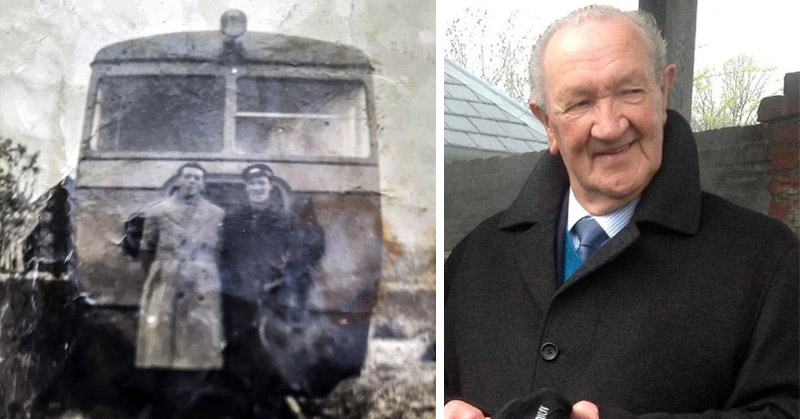 DD Motoring: End of the Line

On this day 60 years ago, the rail transport system across Donegal ran for the very last time. Motoring columnist Brian McDaid remembers Mick Gallen, one of the great characters of the Donegal Railway…

In the days before digital and the web when photos had to be physically delivered to the destination, a Dublin Sunday Newspaper Editor was panicking about a late photo he had ask me to take for that weekend’s Sunday paper in Donegal.

It was a Thursday evening and he was trying to figure the fastest way to get the picture from Letterkenny to Dublin for his deadline,

‘Stick it on the train,’ he suggested.

‘When did the last train leave Letterkenny’, he continued.

‘Gosh’, he replied, ‘wouldn’t you think it would leave on the hour at eight-o-clock.’

It was then that I had to explain that 1959 was the year that the last train left Letterkenny and not the time of the day it departed.

1959, 60 years ago today on the 31st of December, was the last time you could have travelled by rail from Donegal to Dublin.

60 years ago the rail transport system across Donegal ran for the very last time on this day on the 31st of December 1959.

On the 60th anniversary of the closure of the railway we received news down a different line – even a high speed line at times in the clouds – via the web last night as an old sepia tone photo alerted the incoming bell as it made its way onto our digital platform. A day short of 60 years just in time for our deadline, after it was taken on a line and network connection of a different era. The old picture was taken on the very last day of the railway in Donegal at Glenmaquinn Station. 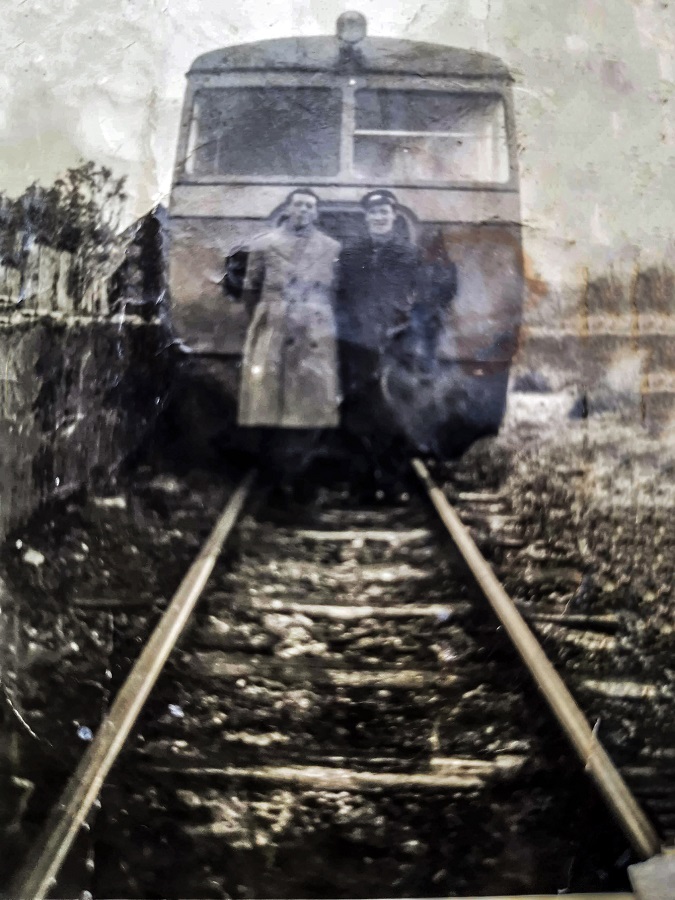 Mick Gallen pictured standing on the track at Glenmaquinn Railways Station with a passenger (believed to be possibly a Mr. O’Donnell from Convoy) and his railcar on it final journey before the railway closed on this day 60 years ago on the 31 of Decembers 1959 when the railway all over Co. Donegal closed for good.

The picture was of the C.D.R. railcar on its very last journey through the station. It included the late Michael Gallen who was the railcar driver and who sadly passed away earlier this year at the age of 96. Michael, also known as Mick is pictured standing on the track at Glenmaquinn Station with a passenger (believed to be a Mr. O’Donnell from Convoy) and his railcar on its final journey.

Tracing the location of this old faded image we received this week, we went up to the old location of the CDR Glenmaquinn Station where the historic photo was taken and surprising how little the location has changed 60 years on. 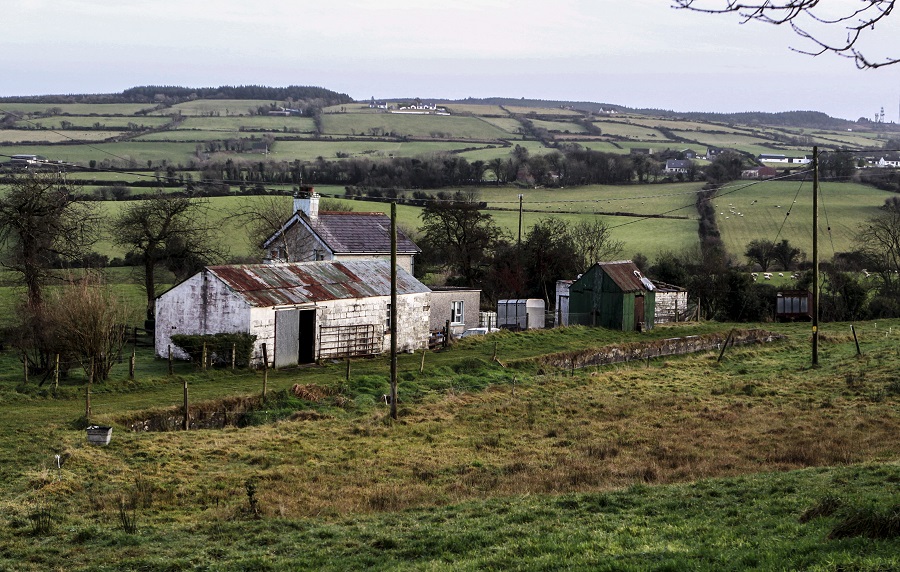 The platform and station house at Glenmaquinn still clear to be seen on the CDR line from Letterkenny to Strabane which closed on this day 60 years ago in 1959 Photo Brian McDaid. 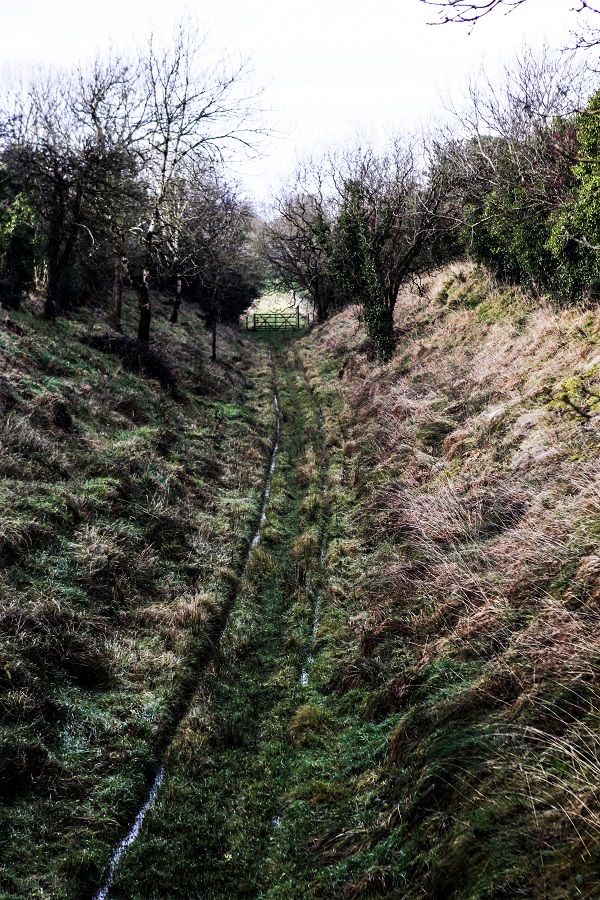 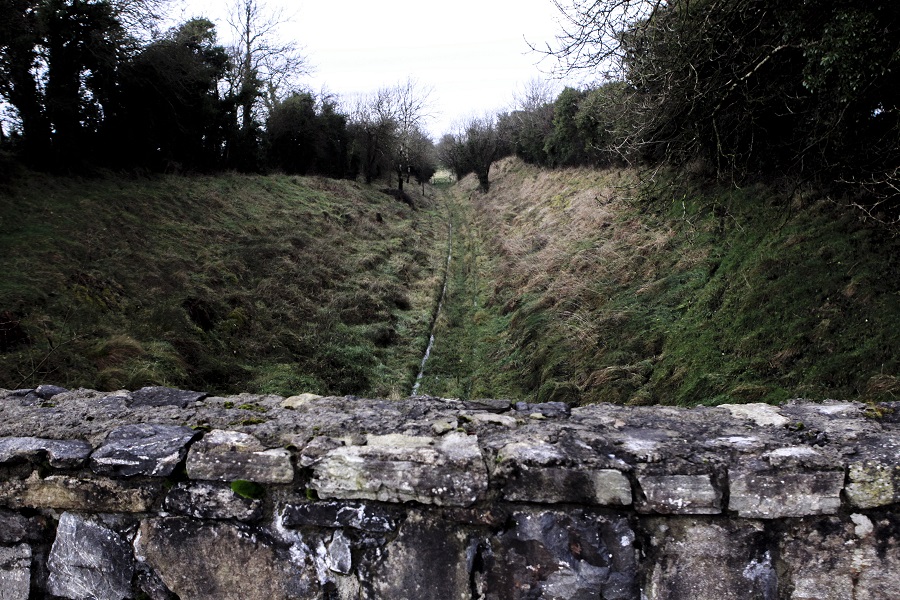 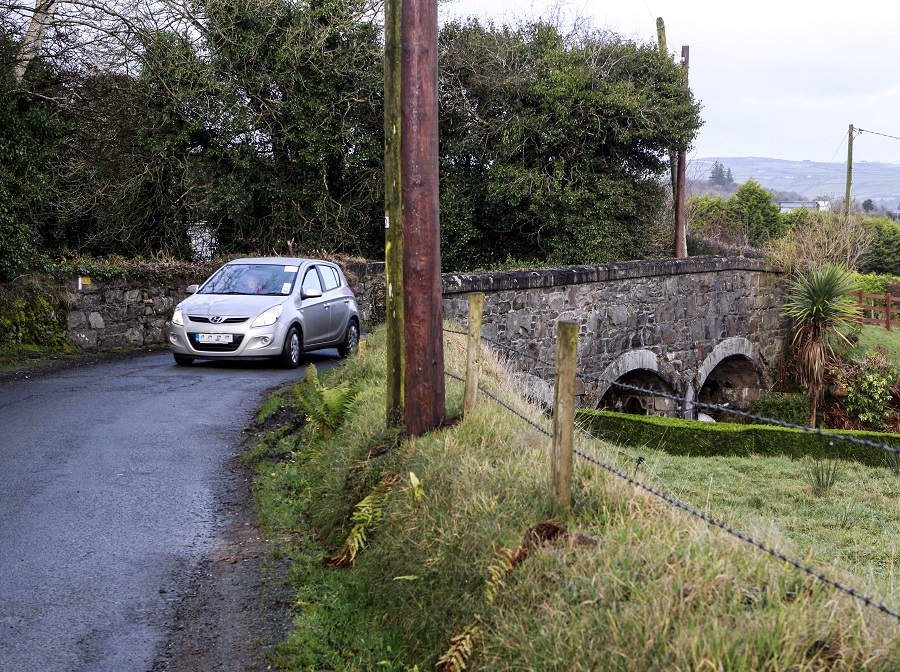 The station, the platform and the three-eyed-bridge where the train would have made its way under the road are still all in place and on the Letterkenny side of the station the ‘cutting’ down the line looks exactly as it was the day the railway closed 60 years ago. It feels that at any minute the Letterkenny to Strabane goods train could come steaming up the line into Glenmaquinn Station.

Or even the railcar with Mick Gallen at the controls would roll in to lift passengers heading to Strabane of even “Isterbane” or even Mister-ban.

A smart Windsor knot, a warm smile, a friendly wave and a gentle deep voice. That’s how many will remember one of the last of the Donegal Railway drivers that was Michael Gallen.

A typical day for Micheal Gallen started with a bit of preparation the night before especially in the winter.

On the railcar in winter, when there was a heavy frost you had to drain the water out of the engine at night, you took two plugs out and drained the radiator. You kept the plugs out and put them near the sleeper under the rail so you knew where to get them in the morning. Then you refilled the radiator with water. There was no such thing as antifreeze then. The railcars were not hard to start in the morning. The big Gardiner diesel had a fuel pump, you pumped fuel into the cylinders, then you used a heavy duty electric self start. The battery box was in the cab. You also carried a gallon of oil on top of a newspaper in the cab. You also had to cool the engine in the summer by running with the inspection flaps opened.

Mick Gallen worked mostly on this Strabane to Letterkenny line travelling through Lifford Ballindrat, Raphoe and Convoy Glenmaquinn on the way into Letterkenny. As a child Brendan Delap who lived in the Lough Swilly Railway Station House in Letterkenny recalls going into the CDR station next door when he would see Mick Gallen arriving at the platform in his railcar and would go down the line for a spin to the turntable where Mick would turn the railcar around and then back it up to the platform so it would be ready for to go in the morning. 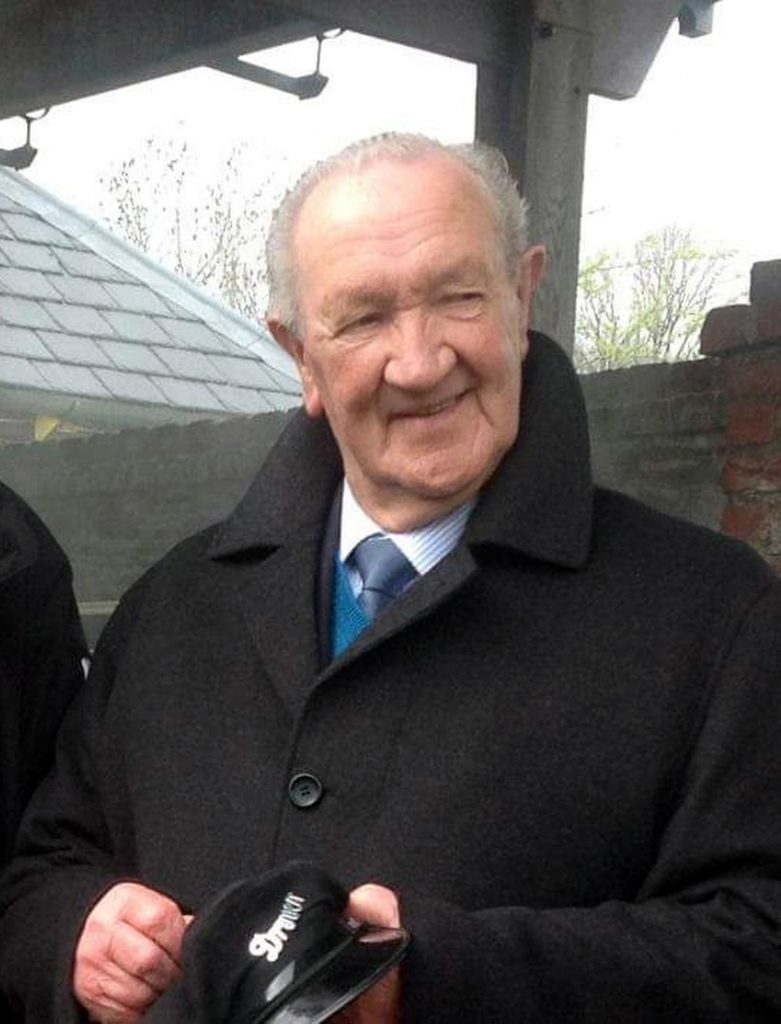 Mick also headed to the seaside on the railcar on “Specials” or excursions as they were then called to Rossnowlagh in the summer then on to Ballyshannon where the line ended and drivers and guardsman would head down to Dorrian’s Hotel for their tea before heading back to take the day trippers home on packed railcars in the evening.

There was always talk about the CDR closing the railway but even so you would know listening to Mick Gallen talking about them years on the line he was very proud to work on the railway and even though the machinery was getting very tired, he always tried to keep the railcar he was driving well presented just like the way he presented himself. 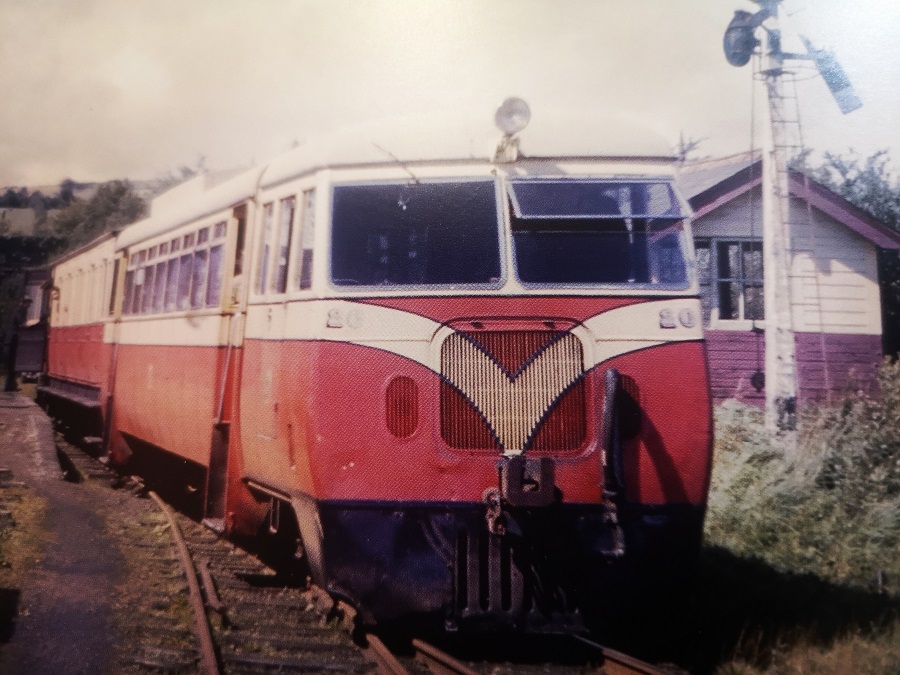 In the late 1950s a section of track from Ballindrat to Lifford was renewed. Mick recalled that the work was that good that the normal clicking of the wheels from length of track to track was so even you could hardly hear anything only the sound of the 6 cylinder Gardiner Engine.

The work on the track looked to signal that possibly the Strabane to Letterkenny line was going to be kept in operation but with in a year of the new track going down all of the Donegal railways were closed.

The last day of 1959 saw the rail network in Donegal closing with the CDR moving their freight and passengers to road transport. Mick Gallen moved from driving a railcar to a bus on the road and mostly travelled the same route as he did in the rail car from Letterkenny to Strabane going through Glenmaquinn, Convoy, Raphoe, Ballindrat, Lifford and Strabane. 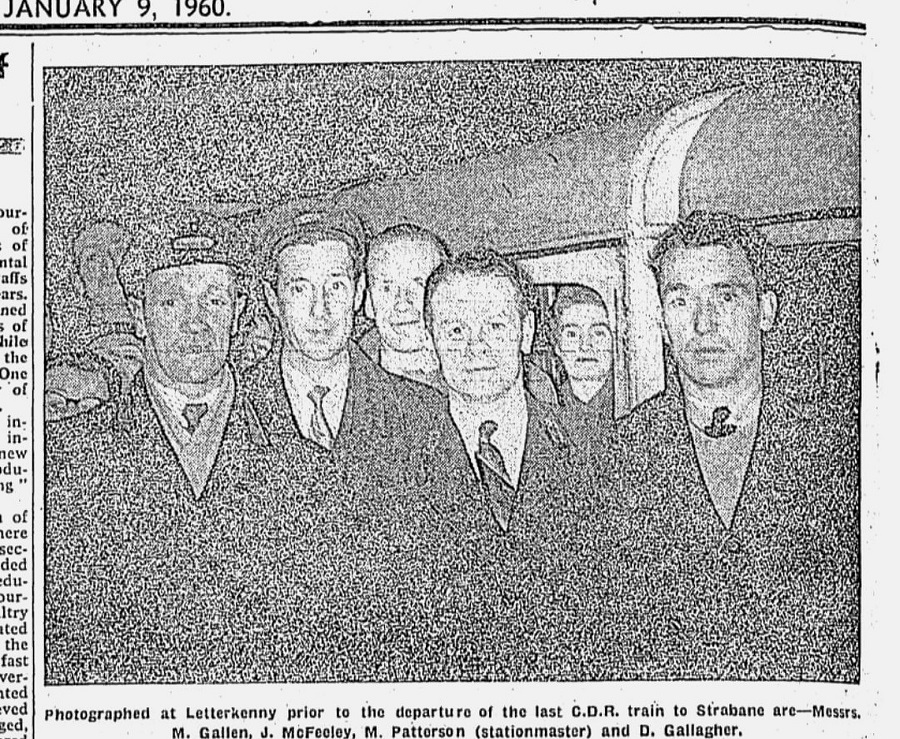 Friday was a big day for shopping in Strabane with the markets on. When we were wains and couldn’t pronounce Strabane we called it Mister-ban or the “Ister-ban bus” and most times it was Mick Gallen who was the driver of this bus as we smuggled our shopping back over the border to Donegal.

Students who received their 2nd level education at The Raphoe Royal, Prior and Comprehensive travelled from Letterkenny and Convoy would remember the friendly welcome Mick Gallen would greet them with every morning and afternoon over the many decades he drove the bus for the CDR which was then taken over by CIE.

Michael Gallen is just one of the many people that made the CDR and the Lough Swilly railways in Donegal such a great memory in the minds of many who passed the stories down from generation to generation though the 60 years after it all came to an end.

And a Happy New Year.