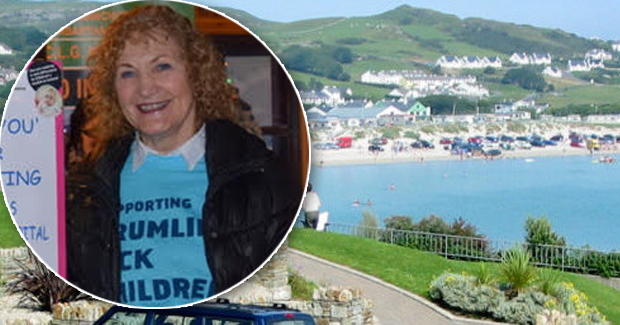 Following in the footsteps of Eleanor’s inspiring journey

When Bertie was running the country during the Celtic Tiger years, Eleanor came across the Fianna Fail leader around Drumcondra in Dublin.

Never one to miss an opportunity, she demanded Bertie take her to nearby Croke Park with a signed Donegal jersey for a photo opportunity.

He protested, mumbled something about being too busy running the country but eventually gave in.

Over the past 20 years, a lot of people across Donegal and the rest of the country have given in to Eleanor.

And why wouldn’t they?

Like many others who have dedicated many years of their lives to chosen charities, Eleanor’s story is tinged with more than a little sadness.

Having lost her teenage daughter in a road crash, she was asked to donate her child’s organs so that others could have the chance of life.

After much wrestling with her conscience, she finally gave permission but in the process saw the amazing work carried out by Crumlin Children’s Hospital.

And not one to stand idly by, Eleanor has dedicated the last 20 years of her life in helping to raise funds for the many children helped by the Crumlin Children’s Hospital in Dublin.

Originally from Co Sligo, many will know Eleanor from her work with the HSE’s support services in Co Donegal where she worked for many years.

Although now living in Dublin, a very large piece of her heart remains in the North-West.

In fact, for the past nineteen years, Eleanor has spent the first few days of each year in Downings where her annual walk/run has grown and grown.

Just three runners took part in the event in the year 2,000 but that grew to more than one hundred as well as countless walkers last year.

The first year the event raised €3,000 and the foundation stones were set on an event that would become part of the community for the next two decades.

Along the way it has collected a staggering €338,000 to help young people whose lives have been less fortunate through no fault of their own.

But alas Eleanor now feels she has done as much as she can and has passed the baton on to other people to continue the event.

This will be her last year to organise the event but she says she is happy that its future is in very safe hands.

“There’s no question it will go on. I feel as if I have taken it as far as I can and now some new blood is needed to freshen it up.

“I’m very happy with the people who have agreed to come in and help run it in the future. They are good people and their hearts are in the right place so that gives me peace of mind,” she said.

Eleanor also likes to lead by example and has competed (and completed!) an amazing 27 Women’s Mini-Marathons in Dublin which has also helped raised funds for CCH.

She constantly says that she could not have raised these funds wihtout the help of so many people across Donegal.

Thanking them all would mean missing this year’s event because it would take her so long to rhyme them off.

Her old sparring partner Paddy Carberry from Letterkenny as well as Enda Nicholls and Darren McElwaine from Arena 7 are just a couple who drop off her tongue.

“There are so many more – many who never want to be mentioned but they know who they are. I want to thank each and every one of them for all they have done over the past 20 years.

“I want to assure them that their generosity has gone directly to helping improve the quality of so many’s children’s lives and I will be eternally grateful for that,” she said.

This year’s Walk/Run will kick off from The Singing Pub, Downings at 12 noon on January 1st 2020 and everyone is welcome on the day.

People can walk or run the scenic Wild Atlantic Way route. No matter what your walking or jogging ability is you can take part because there’s a roaming car to collect anyone who gets too tired. There are sweets and minerals along the route, and soup and sandwiches at the end of it for everybody.