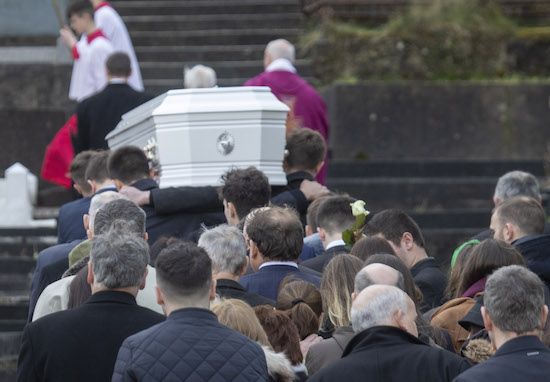 The community of Ardara has never been closer than it was today when it said a sorrowful farewell to tragic nurse Mary Ellen Molloy.

The 26-year-old died tragically when a tree fell on the taxi in which she was traveling with friends in Melbourne, Australia on December 20th last.

Since that darkest of days, the people of this close-knit community have come together to bring home the young woman who grew up amongst them.

Hundreds lined the streets of Glenties and Ardara in silence, many holding candles, as the young nurse returned home. 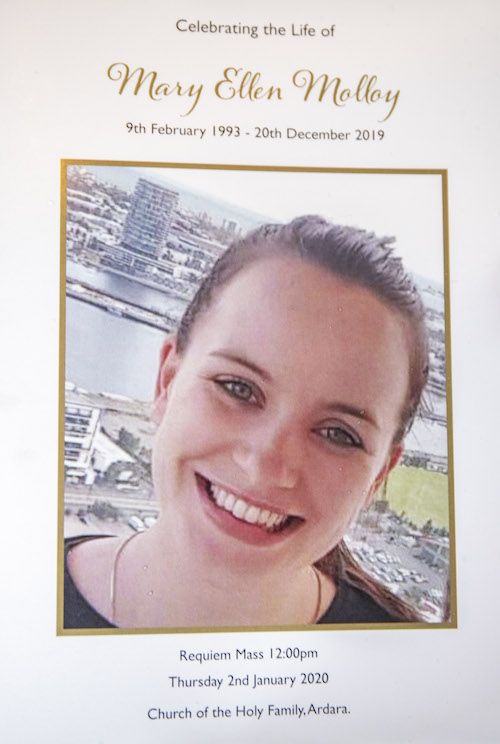 And today hundreds crammed into the Church of the Holy Family in the picturesque town of Ardara for the funeral mass.

Many more stood outside in the cold and rain on only the second day of the New Year and new decade.

Few thought that just sixteen months after Mary Ellen left to work in Melbourne, Australia she would be coming back to the community she grew up in such heartbreaking circumstances.

Hundreds attended her wake at the family home in Edergole from 1pm until almost midnight yesterday.

The community spirit which embodies rural town likes during their dark days was none more evident than in Ardara today.

More than two hours before Mary Ellen’s funeral cortege left her home at Edergole, marshals in hi-viz jackets directed traffic into the town. 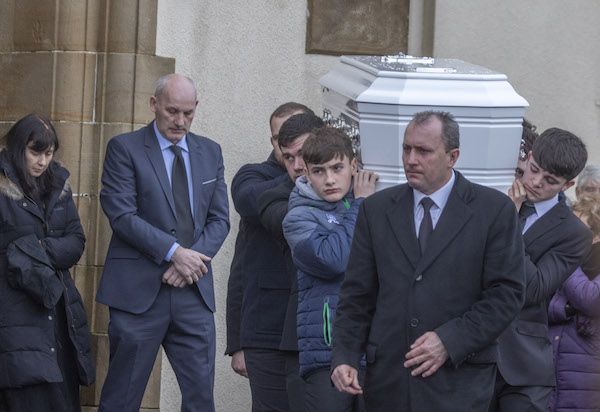 The remains of Mary Ellen Molloy are taken from the Church of the Holy Family in Ardara in West Donegal followed closely behind by her heartbroken parents Angela and Terence . (North West Newspix)

Buses parked on the outskirts of the town shuttling mourners to the Church of the Holy Family.

Outside the mass, schoolchildren and members of Ardara GAA Club with club scarves formed guards of honour into the church.

The funeral mass was led by Fr Johnny Moore and seven clerical colleagues from across Donegal including Mary Ellen’s grand-uncle Fr Desmond Sweeney.

Before Mary Ellen’s funeral began momentoes of her life were placed on the altar including her nurse’s uniform which she wore with pride working at the Royal Melbourne Hospital.

Fr Moore said that at times like this it is difficult to understand death and the reasons why Mary Ellen was taken from her community and family.

He recalled a “daddy’s girl” who loved dancing and drama when she was growing up.

Fr Moore told mourners had been baptised in the same church on March 21, 1993, had also made her First Holy Communion there in April 2005 and had reaffirmed her baptismal vows at her Confirmation.

He also recalled how Mary Ellen would pick a different page from her prayerbook each day and would live her life by that guidance.

“She was brought up to the importance of choosing right from wrong and learned to recognise Christ.

“As a nurse, she was a wonderful carer, showing empathy to others in their time of need.

“She had a beautiful habit of opening her prayer book on a different page each day and made that her intention for that day.

“We also give thanks to God today for the great influence for good that she had on others.”

Fr Moore revealed how there were originally four children in the Molloy family but that Mary Ellen’s younger sister Aisling died when she was just a few days old.

He added that these remarks were only wide brushstrokes which did not fully capture the beautiful person which Mary Ellen was.

“She sought to make time for people and always took time to take something positive from the relationships she made in her short but full life,” he added.

He encouraged mourners to remember Mary Ellen as a daughter, sister, grand-daughter, niece, friend or colleague and as the woman that she was and tried to be. 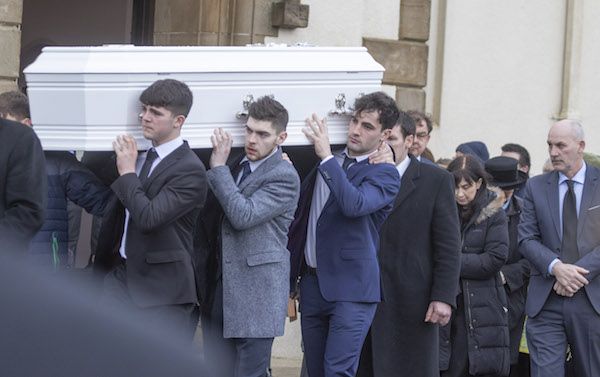 The remains of Mary Ellen Molloy are taken from the Church of the Holy Family in Ardara in West Donegal followed closely behind by her heartbroken parents Angela and Terence . (North West Newspix)

He also referred to her life as a nurse and described her as a “wonderful carer” of people.

Fr Moore said the Molloy and Gillespie families would be forever grateful for the support and love they have received since news of the tragic event first broke days before Christmas.

However, he said there were two people whom the family wanted to thank and that was Mary Ellen’s friend in Melbourne, Cathy Whelan and also Deputy Pat the Cope Gallagher who had co-ordinated the arrangements to bring Mary Ellen home.

Six of Mary Ellen’s friends fought back tears as they read Prayers of the Faithful.

Mourners fought back tears as another of Mary Ellen’s friend recited a reflection after communion.

Among the lines of the reflection were “I see the countless Christmas trees, Around the world below, With tiny lights, like heaven’s stars, Reflecting on the snow.

“The sight is so spectacular, Please wipe away that tear. For I’m spending Christmas with Jesus Christ this Year…”

A special mass booklet produced for the funeral included pictures of Mary Ellen as a child, in Melbourne, out socialising and also in her nurse’s uniform.

A message accompanying a picture of Mary and her family simply read “Mary Ellen’s family thank you for your presence here today, and for sharing in her life. Your support and prayers are much appreciated.”

After the funeral mass, Mary Ellen’s remains were brought to the adjoining cemetery for burial.