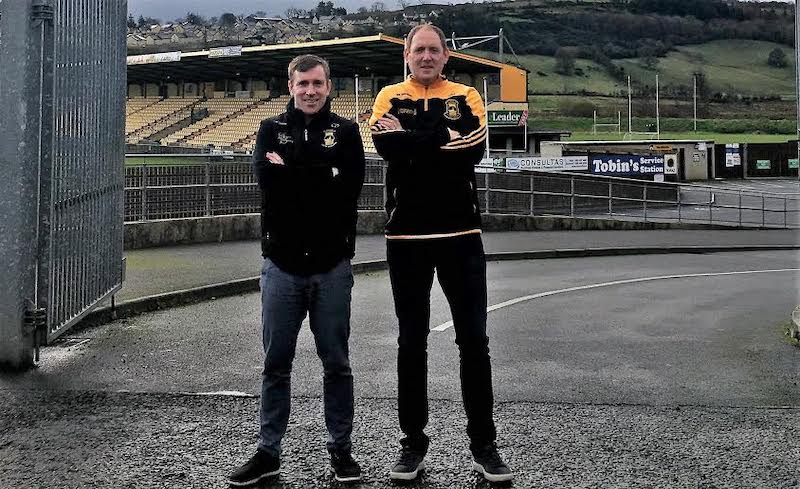 Former stars lead changing of the guard at St Eunan’s

Two of St Eunan’s former footballing greats have taken up key roles at the Letterkenny club.

John Haran, the new St Eunan’s chairman and Conall Dunne, the club’s new treasurer, have a total of 14 senior championships between them – John has eight while Conall six.

John Haran (43) was vice-chairman for the last five years before taking over from Cathal Green at the annual general meeting at end of 2019.

“I suppose taking on the position of club chairman was the next natural step for me. Cathal did great work as chairman and I am looking to continue that,” John said.

“I have a young family and they are involved now, so it’s about giving something back.”

With 35 teams, St Eunan’s is the biggest club in the county.

“With a big club comes a big challenge,” John added.

“The biggest challenge we have is to keep Gaelic games to the forefront. If we can manage to do that we will help keep St Eunan’s successful.

“We are constantly competing with other sports, so we have to be at the top of our game. We also have to be able to offer the best facilities and the best opportunities possible.

“While our seniors will always be our flagship teams, they can’t be the be-all and end-all.

“If the structures are right and underage level, then hopefully we will have enough players coming through the system that will leave us is a position to be challenging for silverware.”

At 36, Conall Dunne called time on his playing career at the end of last season.

“Once I made that decision, I felt it was only right that I try to give something back to the club,” Conall commented.

“The previous treasurer, Niall Doherty, who did a lot of good work in his term as treasurer, had indicated that last year was going to be his last.

“I’m an accountant with a background in finance, the club needed someone in that area and I was happy to step up.

“I’ve been part of the club all my life. I’ve had great times and made great friends over the years.

“The one thing I have realised since becoming part of the club’s administration is how important it is for us to be able to offer good value for money. It’s also important that the club invests its resources in the best areas for the future.

“Investing in the youth is the big thing and we are looking to encourage participation and involvement from non-GAA people in St Eunan’s GAA Club.

“We are a big club, yet I think we are also a small club in a big town. So it’s important that we reach out to people from other backgrounds and communities and increase the level of diversity within our club.”

The new treasurer explained that the club was preparing a number of sponsorship packages for the new season.

H said: “We are also looking at the naming rights of O’Donnell Park and the possibility of the ground being named by a major sponsor.

“We have seen this happen at a number of grounds around the country and it is something we are keen to tease out.”