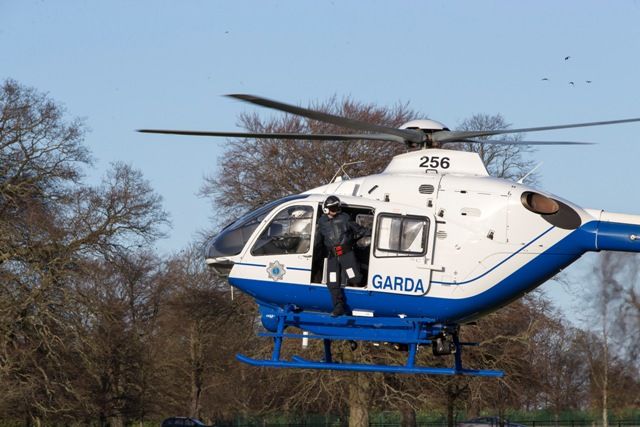 The Malin Head Coastguard station has co-ordinated a search for three suspects in an attempted burglary in the early hours of this morning.

Gardaí have arrested three individuals, and another is in hospital, in connection with the incident in Mohill, Co Leitrim at approximately 4.30am.

Uniform Gardaí attached to Mohill Garda Station on active patrol in the Mohill area came upon these vehicles at 4.32am.

On approaching the location their patrol car was rammed by one of the vehicles at the scene.

Garda members were seen to by emergency services following this collision and are under medical review.

Occupants of the car involved in the initial collision fled in a second car in the direction of Drumlish.

This car crashed a short distance away. Gardaí went to the scene of this collision and found one male in the vehicle with serious injuries.

Emergency services were alerted to tend to this man, who is in his 30s. He was conveyed to Sligo University Hospital where he is being treated for serious but non life threatening injuries.

Up to four suspects fled the scene of the collision on foot, and Gardaí engaged the services of the Malin Coastguard in the search for these suspects as the Garda Air Support was engaged in a separate incident.

At 9.25am today three males, one aged in their 30s, another in their 20s and a juvenile were arrested at Tamlaght Mor, Mohill, Co Leitrim.

They were stopped as part of a cordon and checkpoint operation mobilised by Garda in Leitrim and they are currently detained at Carrick-on-Shannon under Section 4 of the Criminal Justice Act.

One person is still being sought by Gardaí in connection with this matter and Gardaí in Leitrim have issued an appeal for witnesses who may have information in relation to this person’s whereabouts.

Gardaí are appealing for anyone who was travelling along the Mohill to Drumlish Road approximately 1km from Mohill who may have seen individuals on that road to make contact with them.

In particular, they wish to speak with anyone who may have given a lift to an individual or people this Wednesday morning.

Anyone who was in the vicinity of this incident this Wednesday morning and who may have video footage or information regarding suspicious activity in the Mohill area is asked to contact Gardaí at Carrick-on-Shannon (071) 9650510, the Garda confidential line 1800-666-111 or any Garda Station.