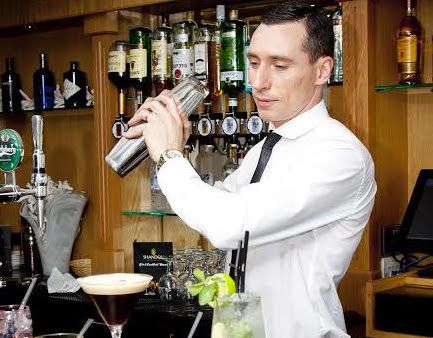 My Donegal – with the Shandon Hotel’s cocktail king Trevor Murphy

If cocktails are your favourite tipple, then there’s no better man to shake them for you. Trevor Murphy is Deputy Bar Manager and Duty Manager at the luxury Shandon Hotel & Spa at Marble Hill.

He joined Team Shandon shortly after it re-opened and has progressed up the career ladder due his attention to detail is second – and comments left by customers who absolutely loved his professionalism and friendliness. This is My Donegal.

It has to be Dunfanaghy. It is a lovely village and the people were very welcoming from the first day I visited.

What would your ideal day off in Donegal be like?

It would be a nice day at the park or playground with my daughter followed by a nice evening meal with my wife, afterwards relaxing in front of the television

Who is the one person in Donegal you look up to and why?

I don’t have any one person in particular because I have met too many people that have helped me since arriving to Donegal.

Daniel O’Donnell, because I have had the pleasure of meeting him and he is a true gentleman.

Donegal winning the Ulster Final 2019 has to be the most recent and proudest moment for the county as a whole.

Dulaman’s Gin has to be one of my favourites along with Silkie whiskey.

Daniel O’Donnell because he is known worldwide and is a great ambassador the county.

Who is Donegal’s most successful business person in your opinion?

I have two people in mind, Jim McGuinness and Declan Bonner, both men have done a lot for Donegal football over the years.

What is your favourite Donegal expression?

“Wain’s”, I think that is the spelling. The famous Donegal word for children.

What is the biggest challenge facing Donegal in 2020?

Because of the trade I am in it would be maintaining the tourism trade and spreading the word about how brilliant this county is.

Our famous seafood chowder at the Shandon Hotel.

Is there anything about Donegal or Donegal people which really annoys you?

They talk very fast when they’re in groups and it can be very hard to understand them, especially for a blow-in like me LOL!

If you had a million euro to spend improving something in Donegal what would you spend it on?

Give it to Irish Water to help speed up the road works… (to be fair they’re doing loads in the county).

What has been the most exciting moment of your career so far?

Moving to the Shandon Hotel to advance my career and enhance my skills.

Is there anything about Donegal that you’re really proud of?

Scenery is incomparable and changes every day.