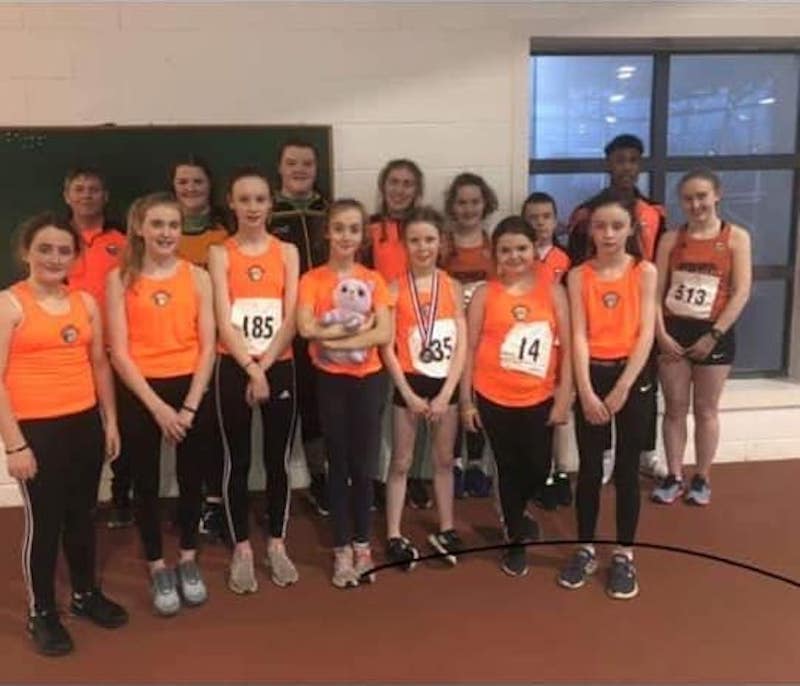 SOME 14 juvenile athletes from Rosses AC competed recently at the North West Games.

Johnson Bangura was in fine form returning home with Gold, Silver and Bronze in 60m, long jump and 400m respectively.

Johnson now looks forward to the Ulster Indoors in February.

Una Richardson competed in u12 long jump, 60m and High jump securing bronze in a highly competitive long jump event. Una also competed in high jump for the first time setting a PB of 120cm. Much more to come from this young lady.

Sisters Amber and Sheila Gallagher narrowly missed out on podium finishes in u14 and u16 Shot Putt and also look forward to the upcoming Ulster’s.

Other competitors on the day were Aine and Pat Boner, Erin Gallagher and first time competitors in a Rosses vest were Maria Ní Ghallchóir and Aine Ní Dhomhnaill u14 and Ciara Duffy, Robyn Curran Aoife Ní Dhomhnaill, Deirdre De Burca u12.

All competed well in their respective events and they gained a lot of experience competing against a high standard of competition.

A brilliant run, well organised with a big crowd of 170 runners & walkers. Charlie Postie won the race overall with a time of 17.07. Mark Ward was 2nd in 18.19 & Manus McHugh 3rd in 18.21. Helen McCready was 1st lady followed by Denise Mc Cann and Cathy Breslin, with a great start to the year in 3rd.

Last Saturday, Cathy Breslin completed her 50th Parkrun where Helen McCready and Amy Greene hit Parkrun PBs, using what is a brilliant amenity in Dungloe for a training session- 9.30 every Saturday morning – free and welcoming to everyone, Make it your thing for 2020.

There was also a charity 8K Fun Run / Walk on Saturday 28th at Tech Jack Glassagh – Declan Ferry and Kathleen Rodgers came home in the top spots and the real winner was Crumlin Children’s Hospital as €380 was raised.

2019 Darren Mills Memorial Run/Walk, Thursday 26 Dec- there was a fantastic turnout of over 130 runners and walkers for the event, run in glorious conditions.

Charlie Postie O’Donnell was the overall winner covering the beautiful 6k course in 20:30. Charlie wasn’t the only winner with Rosses Athletic Club and North West Simon Community the two beneficiaries from the run.

Over €1300 was raised on the run/walk alone with an evening raffle to follow to bump that up considerably.

A mention to Patrick Trimble on winning the St Nauls 5k that morning before going onto run the Darren Mills 6k – That’s a tally of 4 races from Boxing Day to New Years Day!

Success for Letterkenny AC athletes at each...