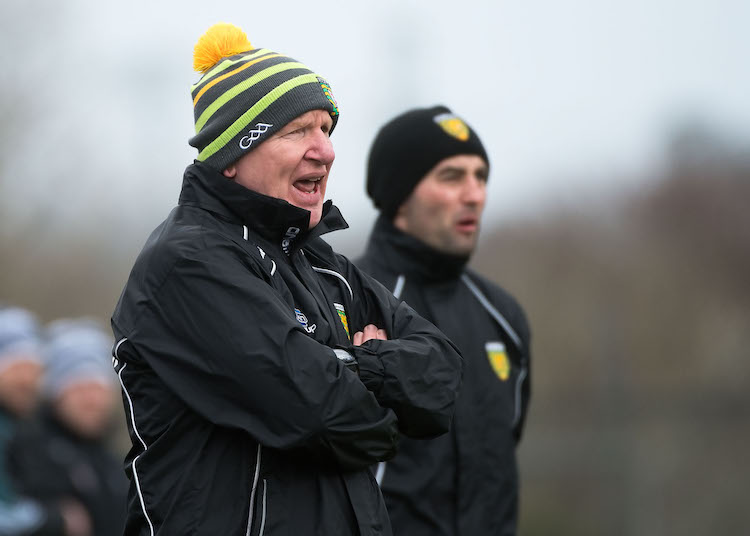 THE ULSTER Council has insisted that Sunday’s Dr McKenna Cup semi-final between Donegal and Monaghan will go ahead as planned.

Last night,Donegal manager Declan Bonner insisted that he would not be able to fulfil the fixture owing to the large volume of players who were in Sigerson Cup action on Sunday with their colleges.

After last night’s 1-10 to 0-8 win over Derry at Celtic Park, Donegal county secretary Declan Martin tabled a request to have the semi-final put back until Tuesday.

One of the counties involved in the other semi-final – Down, who are taking on Tyrone – submitted a similar request.

However, the Ulster Council has issued a statement on the matter.

“An option to play the competition in early December, which would have facilitated University teams being included, was previously rejected by Ulster CCC following consultation with our counties,” the Ulster Council said following a meeting of the provincial CCC this afternoon.

“Therefore, when drafting the fixture schedule following the draw on 4th December, the committee and counties were fully aware that the First Round of the Sigerson Cup was also scheduled for this weekend of 11 -12th January.

“Given the tight schedule under which the Bank of Ireland Dr McKenna Cup must be completed, the view of the committee was that it was necessary to use this weekend.”

Sigerson Cup action on Sunday takes in 15 of Donegal’s panel.

Michael Lynch, Eoghan McGettigan, Peadar Mogan and Michael Langan are set to play Sigerson football for Letterkenny Institute of Technology in Athlone on Sunday, while Donegal captain Michael Murphy is the LyIT manager.

Paul Brennan and Andrew McClean are at IT Sligo, while Shaun Patton is part of the Garda panel.

Defenders Brendan McCole, Conor Morrison and Jeaic Mac Ceallabhuí are on the DCU squad, as is the currently-injured Oisin Gallen and Aaron Deeney is at Queen’s University. Niall O’Donnell attends Maynooth University and Stephen McMenamin turns out for DIT.

Last night, Bonner said: “We just don’t have the numbers.

“We had 23 players togged out tonight. We didn’t fill the 26 and it’s very difficult.

“It’s crazy, absolutely crazy. It’s very, very difficult. We have to manage that and be careful of player welfare. As it stands, we just won’t have the numbers to field.”

The Ulster Council also cited ‘welfare’ in their statement.

The provincial body said: “At their meeting today, the committee also considered the welfare of players and took the view that from a player perspective, it would be unfair to expect players to play in the Sigerson Cup on Sunday 12th and line out for their counties on Tuesday 14th – and potentially be expected to play again for their county in the Bank of Ireland Dr McKenna Cup Final on Saturday 18th January (and perhaps for their University the following day).

“The Bank of Ireland Dr McKenna Cup is a well established pre-season competition which gives counties the opportunity to rotate their squad and look at players in an inter-county environment.

“After careful consideration of all the factors, the committee took the view that the Bank of Ireland Dr McKenna Cup semi-finals should be played on Sunday 12th January, as scheduled.”

Donegal v Monaghan is pencilled in for Brewster Park with Tyrone taking on Down at the Athletic Grounds in Armagh. Both games are scheduled for 2pm.