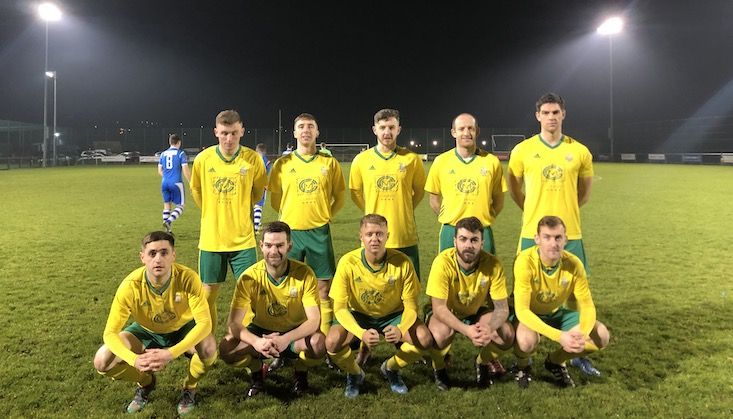 ON THE day he was confirmed as part of the Finn Harps Under-17 management, Michael Funston bagged one of the goals as Bonagee United overcame Harps Reserves.

The win, on a night when all of the goals came in the first half, sees Bonagee close the gap on bmcsports.ie USL leaders Cockhill ahead of a derby date at Letterkenny Rovers on Sunday.

Funston hit the second goal for Bonagee, who needed a third by Deano Larkin, just after Stephen Black pulled a goal back for Harps.

Beforehand, Gibson mentioned how his side was entering a ‘massive’ period that was touching the boundaries of the ‘must-win’ territory.

Before a healthy crowd at Dry Arch Park, it was the young Harps – with new U19 and U17 managers Tommy Canning and Eloka Asokuh in the dugout – who began brightly.

Harps would have been in front after just 15 minutes, but a brilliant save by Eugene Ferry, the Bonagee goalkeeper, kept the stalemate intact. Black connected with a dangerous corner and his header looked goal-bound, but Ferry arched the effort up and, just, over the crossbar.

Earlier, Micheál Doherty didn’t quite get the necessary connection on a 20-yard effort to test Jamie Bell.

Doherty broke the deadlock on 24 minutes, however. Gareth Breslin’s long ball was inviting and Doherty was quickest to react, prodding beyond Bell for th lead goal.

Corey McBride’s free was kept out by Ferry before Bonagee – who gave a competitive debut to ex-Harps captain Packie Mailey – doubled the lead on 27 minutes.

Larkin’s initial shot, from the left-hand side of the penalty box, was saved by the legs of Bell, but Funston riffled home the rebound.

Funston has been confirmed as number 2 to Asokuh with the Harps U17s for 2020 and, having played over 300 times for the club, is well got around Finn Park. Here, though, there was no emotion as he smashed in to make it 2-0.

Larkin headed over at one end and in the lively exchanges Harps rescued the arrears. The Black twins combined with Conor’s free kick headed home by Stephen.

The Bonagee response was instant and Larkin riffled in to restore the two-goal cushion.

The zip went out of the contest in the second half, although Ferry had to be alert to beat away a couple of testers from McBride as Harps went in search of a way back, but Bonagee had done enough.