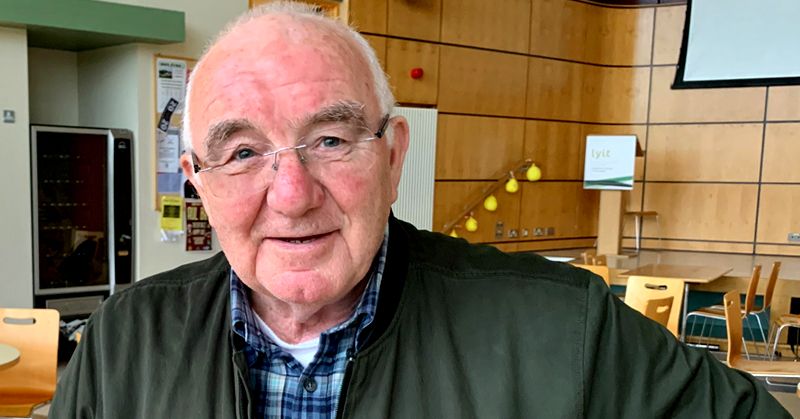 The Letterkenny Pantomime celebrates its 70th year in 2020, and so too will Director Patrick Doherty.

At the tender age of six, Patrick played the leader of the Bumblebee Quartet in Dick Whittington in 1956.

Now, as he approaches his 70th birthday in March, he has a ‘slightly’ higher leadership role – commanding a monstrous production and a cast of over 100 in the 2020 panto Cinderella.

Cinderella was in fact the very first panto to be staged in Letterkenny back in 1950 at the Devlin Hall on Lower Main Street. The Deju Vu SVP store now occupies that space where many Letterkenny locals made a proud stage debut. The panto continued there for around 10 years before taking a break.

Musical theatre never left Patrick’s heart, and in 1985 he took on the direction of the pantomime, two years after it was resurrected by Aussie Bryson in 1983. It had been brought back to fundraise for the Letterkenny Community Centre, and they continued with shows in the community centre, St Eunan’s College and the Mount Errigal for another 10 years.

In 2001, Patrick had another type of motivation to bring the pantomime back, following the passing of his beloved wife Bernie.

“My wife died of cancer, at that stage and I decided we would raise money for the Hospice. So I came up with the idea of resurrecting the pantomime myself and the Hospice came on board with us,” he said.

Over €16,000 was raised for the Donegal Hospice from The Frog Princess at the newly-opened An Grianan Theatre.

And that community focus has been what makes the Letterkenny panto so unique. Each show night is offered to a host group, such as schools, football clubs and church funds, who sell tickets, run a draw, and walk away with a profit for themselves.

Few people will realise the amount of work that goes on behind the scenes long before opening night.

After a January play is done and dusted, Patrick is back into panto mode in April/May, writing the script and looking forward to casting in autumn. Come winter it’s full days and long nights of rehearsals and preparations.

The draw of the panto is in the localised script, the new talents and the familiar faces.

“This year, I have the best cast ever,” Patrick says.

“I haven’t the most talented cast I’ve ever had. But I have the easiest cast to work with. They are a director’s dream.”

Patrick counts himself lucky to have a big turnover of talent available in Donegal, with six new faces this year, but there are some legendary names that the audience always loves to see in the programme.

“If you mention pantomime in Letterkenny, I’m not the first name that springs to mind. It’s Tommy Sweeney. That doesn’t offend me because I gave Tommy his big break because I recognise the talent he had. He is THE legend of pantomime,” Patrick said.

Patrick is reluctant to name names because too many other great characters have graced the stage over the decades.

It may be an amateur show, but they always strive to bring it to a professional level. This year’s Cinderella show promises to be a real dazzling spectacle with musical direction by Paul Ward & The Humble Earthworm and choreography by Fusion – Events & Opportunities.

After all the work is done, Patrick allows himself just one moment of pride at the final curtain:

“I’m not a glory seeker by any means. The last night of any show I would go missing. I go to the back of the hall and I look down. People are on their feet clapping. I just look down and say ‘I made that happen’.

Over the years Patrick has proudly seen his cast members flourishing from childhood to adulthood. Some people started as fairies or little elves in the children’s chorus, or saying one line as a young newcomer, before returning as lead stars.

The pantomime cast has members aged from 4 to 84, and this year they will have three generations of Dohertys on stage.

He may live and breathe panto, but Patrick is planning to step back from the director’s role sometime soon.

“My term is coming to an end and I would imagine it’s fairly shortly. It definitely has to move on. We have brought it from being a very amateurish panto in the 50s to scale the heights. We’ve modernised it,” he said.

It has always been a group effort and Patrick is confident that, without him, the show will continue to go from strength to strength with the current committee.

Cinderella 2020, at the newer and bigger Aura Leisure Centre venue, is going to dazzle, delight and shock audiences at times.

“I love Cinderella, it probably the best pantomime of them all to do. There is such scope in it.”

“I told people it would be bye-bye after Cinderella because I always wanted to go out with a bang. But I don’t think I’ll go yet.”

Tickets for Cinderella (22nd – 26th January) are out now – available from the Aura Leisure Centre and host groups (details below). For more, visit www.facebook.com/letterkenny.pantomime