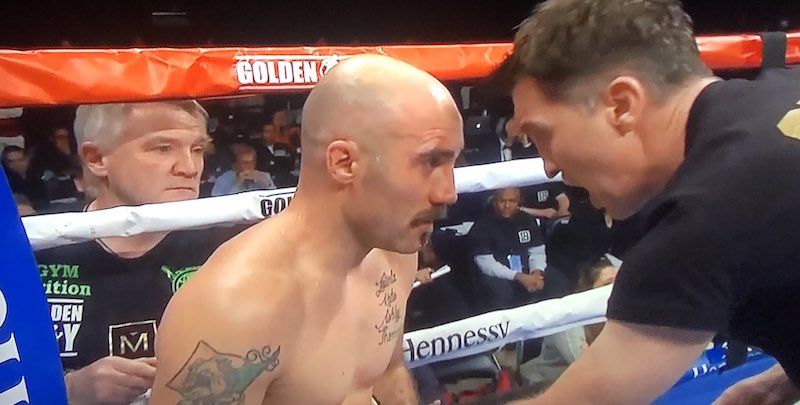 A DONEGAL man was working in the corner of Irish boxer Gary ‘Spike’ O’Sullivan for his big overnight bout in Texas.

Buncrana man Mark Porter was in the corner with O’Sullivan for the DAZN-screened fight.

Cork middleweight O’Sullivan was beaten via an 11th round stoppage by Jaime Munguia in San Antonio.

It was a bout that had all the hallmarks of a title fight, although there was no belt on the line.

Paschal Collins, O’Sullivan’s coach, threw the towel in after two minutes and 17 seconds of the 11th round with Munguia punishing the Irishman on the ropes.

O’Sullivan had fought well at times early on, and had a big finish to the third round, but Munguia soon found a rhythm.

In the sixth, Munguia had a point taken off for a low blow – something that was a feature of the fight.

Munguia, making his first appearance at middleweight, was dominant and the end appeared nigh during the middle-late rounds. The gutsy O’Sullivan stayed for as long as he could until Collins called a halt.

Irish boxing legend Steve Collins, ‘The Celtic Warrior’ – the former  WBO middleweight and super-middleweight titlist – was in the corner alongside his brother, Paschal.

Also an assistant in the blue corner was Porter.

The Buncrana native has been living in Boston for around 30 years now and runs the Boston Boxing Academy.

He is close to several Irish fighters, including O’Sullivan. In March 2018, Porter was in Jason Quigley’s corner for his win over Daniel Rosario Cruz in Boston.

Porter has been an active fundraiser in Boston since he was diagnosed with non-Hodgkin lymphoma in 2005.

He was since held a series of fundraising events and has run the Boston marathon 13 times, helping to raise over $750,000.00 in the process.