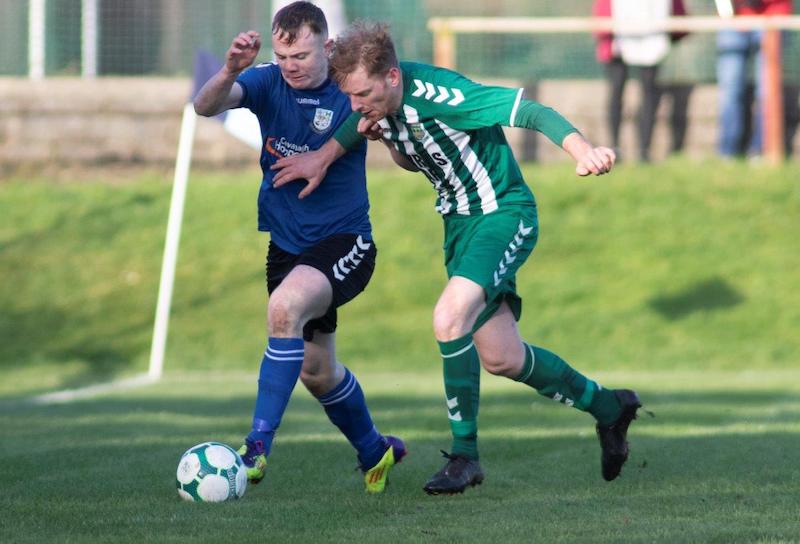 An opportunist goal by super-sub Christy Hegarty two minutes from the end of extra time sent Greencastle into the last sixteen of the FAI Junior Cup at the expense of holders St. Michaels from Tipperary at Chapel Lane.

With a penalty shoot-out looking almost certain Hegarty, who has scored so many dramatic late clubs for his club,  did it again only ten minutes after coming off the bench.

The visitors were pushing for a winning goal in the 108th minute but their attack was broken up and Greencastle centre-back launched a long ball into his opponents half, full-back Richard Ryan and goalkeeper Adrian Walsh decided to leave it to one another but with Christy Hegarty around you just cant afford to do that.

The Greencastle man immediately spotted the opportunity that had presented itself and raced past Ryan before curling an exquisite lob over Walsh’s head into the empty net with the keeper in no-man’s land to send the home supporters into raptures of delight but bring to an end the Tipperary team’s cup defence.

After a first minute attack by Greencastle had caused an anxious moment for the visitors it was they who had the better of the opening exchanges. A last ditch tackle by Darragh Browne denied Russell Quirke after a rare misplaced pass by James Henry had sent him clear.

Quirke had another chance in the 20th minute when the impressive David Slattery had headed a cross from the left into his path but the winger misfit his shot.

Greencastle grabbed the lead in the 37th minute with an excellent goal. They won possession in midfield and when James Henry’s pass forward found Jamie McCormack the midfielder blasted a cracker into the top corner from outside the box giving keeper Walsh no chance.

The visitors responded well and Dylan Doherty produced two excellent saves to deny Jimmy Carr, in the 40th minute, and then a cracking volley from Slattery in the 45th minute.

They also started the second-half well and went close twice in quick succession, including a tight call on an offside decision as the ball finished in the net.

Greencastle had a great chance to increase their lead in the 47th minute. McCormack threaded a super pass through for Nigel McMonagle to run onto but the striker just lost his footing at the moment Ho was about the shot and the chance was gone.

After another period of pressure St.Michaels finally got back on level terms in the 57th minute. Winger William Armshaw did well on the right and his excellent cross was powerfully headed home by David Slattery off the underside of the crossbar, 1-1 and game on again.

Slattery had another chance in the 65th minute but a poor first touch let him down, and five minutes later Greencastle again survived thanks to several last ditch blocks by defenders putting their bodies on the line.

Soon after that keeper Doherty denied Jimmy Carr yet again and as Greencastle hit back the hard working Jason Dickson forced an excellent save from keeper Walsh at the other end.

In the final five minutes of normal time Dylan Doherty denied Slattery and full-back Darragh Browne made a brilliant tackle to block out sub Joe Mulcahy and we went into extra-time.

Goalkeeper Doherty had to be alert in the first period to save when sub John Connery’s cross deflected off defender Gavin Harkin but the drama was reserved for the second period.

Adrian Walsh saved well from Jason Dickson two minutes in but then came that disastrous moment of indecision between himself and full-back Ryan and Christy Hegarty didn’t have to be asked twice to make them pay the ultimately price for a moment’s hesitation and to send his club Greencastle FC into the last 16 of the FAI Junior Cup for the first time ever.

Hegarty the hero as Greencastle dump holders out of FAI Junior Cup was last modified: January 12th, 2020 by Chris McNulty