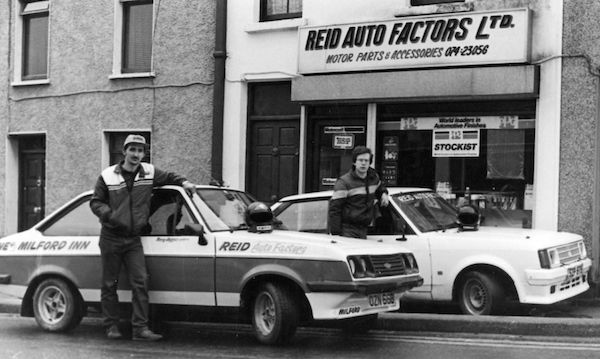 Our story this week is an example of a typical night rally in Donegal and a typical team that took part in it. It’s an example of one of the many Donegal events over the last 50 years in the history of the motor club. Which will be celebrated this weekend. This story is about craic, friendship and about some great memories.

Make no mistake about it.

Caddye being Caddye, he decided that we had arrived to his time point from the wrong direction. It was three against one but Danny Caddye wasn’t for budging.

Our entry was car No 44 The event was based in Ardara at Woodhill House it was the 80’s and a night navigation rally. The car was an ex-Timothy Duggan Ford RS 2000, Standard Production Class, ( now called Group N) now belonging to Danny Caddye. The driver for the car on the night of the rally was Mick Henry and the navigator was yours truly, Brian McDaid, The theory of what looked straight forward in the comfort of what was the classroom a few weeks earlier in the Ballyraine Hotel courtesy of navigators Noel Harvey navigation classes looked a-lot different working with a potty light in the navigators seat working against the clock and trying to be serious when Mick Henry was behind the wheel enjoying the craic trying to figure out where we were going, ‘There’s a road there Brian, it that a time point down there sir! , Nah its a house, you’re Ok, carry on’

The Late Michael Henry, who was full of craic and great to be with at rallying events . Photo Brian McDaid.

The Horror of the Herring Bone.

Things got a bit more serious when we arrived at the herringbone section of the rally, and the Halda was used for the first time that night to measure distance. Disaster struck right away when I went to zero the Halda and the cable broke in my hand.’Is that supposed to do that?’ a worried-looking Henry ask as he looked at the length of cable hanging out of the Halda like a broken builders measuring tape.

‘What do we do now’ he asked as we headed into the darkness of the night with no reference of distance. After stopping for a few minutes we decided to see if we could fix it, we could see the sea in the distance and figured that it would take us down to the main road and possibly into the half way halt with was over by Dunkineely. On the way down we were waved down by an official along the dark country road, just before we pulled up at the control point, Mick said, ‘just let on we know exactly what we are doing’.

Handing our time card out the window and trying to keep a straight face, Michael Chance signed off on our card and told us we were one of the first to get the time point finish of the Herring bone section, much to our shock!

Best in our class.

Arriving at the half way point no one we talked with had made it through the herring bone section, now the competitive edge was starting to grow with in our RS 2000. The second half of the event was even more difficult and at one of the time points we met up with the owner of our rally car, Danny Caddye and his wife Anne. Danny being Danny decided that we had arrived to his point from the wrong direction and he had Anne Mick and me trying to change his mind but he wasn’t for budging.

In the heat of the debate the timecard blew out the window, over a ditch and into the nearby field.

After going through that feeling when you mistakenly step into a drain and the freezing water goes over the top of your shoe I finally found the time card and we were on our way and finished the event and were winners of the novice section.

The one and only Danny Caddye with Eugene O’Donnell and John Mc Glinchey, share a yarn at the Motorclub presentations

That night me and Mick might as well have won the Donegal International Rally as we picked up our awards at the prize giving and long before the days of trailers to transport rally cars, we drove home losing the back section of the exhaust, which we had caught earlier that night on the grass in the middle of a badly tarred road.

As we were heading down over Meenaroy and the din of the RS 2000 filling the hillside, my driver looked over with his two arm straight holding on to the steering wheel and said,
‘Micheal Joseph Henry is some pilot’

This Saturday evening at 4.30p.m in Logues of Cranford, the Donegal Motor Club will celebrate the 50th anniversary of its formation. This is the location where the club run its first rally all them years ago.

The late Anne Caddye, one of the great people in the Donegal Motor Club.

Over the last 50 years the club has run its events at different venues all over Donegal from their biggest annual event, the Donegal International Rally right through to the hills, the harvest rally, the hill climb, the ‘sprint’ through Ramelton, forestry rally, right through to night navigations auto tests and economy runs.

Over the last 50 years figures, for drivers and navigators putting their entries in for events over the years wouldn’t be long in going into the hundreds of thousands and from them numbers a selected few have made it to the overall winners enclosure who become household names in Donegal rallying history.

I’m looking forward to Saturday evening, meeting old friends and sharing in the craic in what should be a great evening.

Jack Cassidy, Phonsie Mc Elwee and Liam Mc Elwee pictured looking through the first notes of the Donegal Motor Club ahead of the 50th anniversary of the Club this weekend in Logues of Cranford. Photo, Brian McDaid.