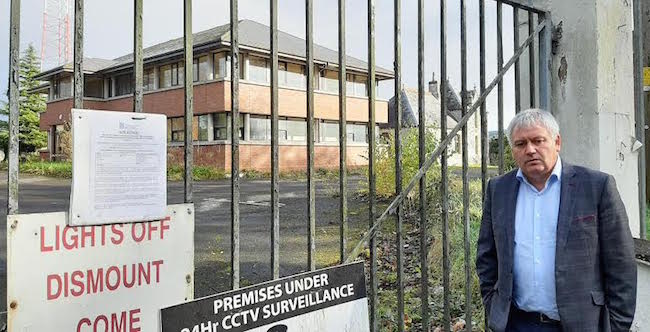 Election 2020: Restoration of army barracks could give Lifford new life

The refurbishment of the old Lifford Army Barracks could be the trigger for future potential investment in the town, said Fine Gael general election candidate, Martin Marley.

Cllr Harley has welcomed the start of the work and sees it as an opportunity to restore activity and positivity to the county capital.

“It’s good to see work has started on the old Lifford Army Barracks. It is something I as a counsellor have been pushing for over a number of years.

The buildings have been vacant for a number of years and that has not been good for the town. Developments like this will restore a heartbeat in the town and hopefully create employment.

Over the years the town has lost so much between the barracks itself, the old Inter County hotel, and various other businesses so I think it’s important that this project injects some life back into the area.

He added that to the best of his knowledge, he understood the Department for Social Protection and Donegal Education and Training Board had made enquiries about acquiring office space in the refurbishment development. Donegal County Council was also going to take office and storage space there too.

“It’s a welcome boost for Lifford and hopefully it could be a trigger for others to look again at Lifford as a potential base for their operations. Once you see a place like the barracks opening up again it gives others the courage and positivity to invest here too,” said Cllr Harley.