DONEGAL BOXERS Leah Gallen and Paddy McShane booked places in finals at the National Under-18 Championships.

Gallen (pictured above) and McShane won semi-finals tonight at the National Stadium to seal their spots on the January 31 finals roster.

McShane will now meet Antrim’s Dylan Eagleson, who defeated John Joyce from Mullingar, also via a unanimous decision, in his semi-final. 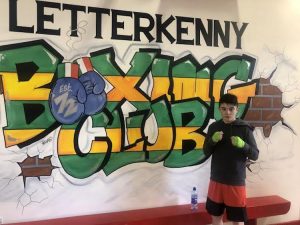 Next Friday night, Gormley will face Holy Trinity’s John McConnell in a semi-final.

Also next Friday, Raphoe ABC welterweight Liam McMonagle faces Dublin Docklands’ James Whelan in a semi-final, while Cody Lafferty of Raphoe is already through to a final. Lafferty faces Rathkeale’s Breda Quilligan in the women’s 48kgs decider on January 31.