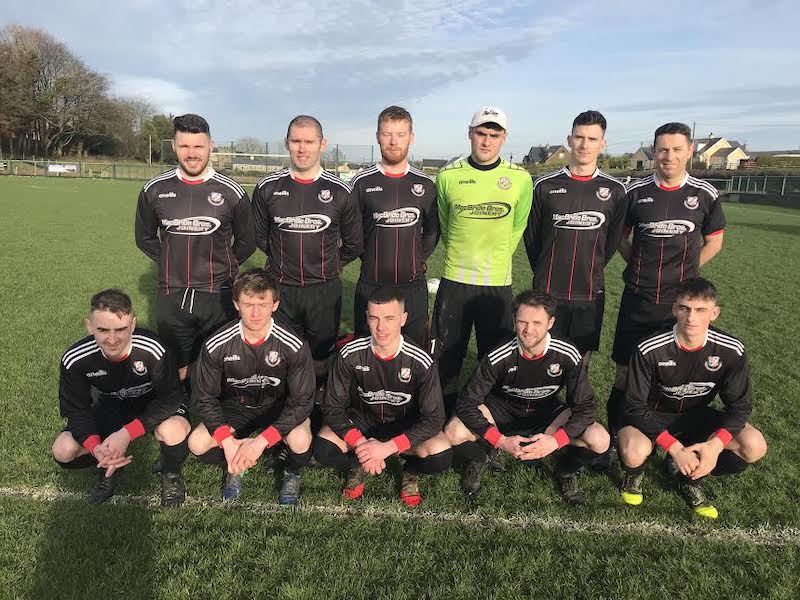 CONVOY ARSENAL’S push for a swift return back to the Donegal League Premier Division continues apace after an early three-goal salvo at The Moss.

By Charlie Collins at The Moss

Convoy raced into a three-goal lead inside the opening 18 minutes with Noah Mailey, Gary Brolly and Darren McElwaine on target.

JP Malley added a fourth in the second half after Chris O’Donnell reduced the deficit.

Convoy led after just three minutes when Mailey’s corner ended up in the net amid the confusion of a scramble.

Seven minutes later, Convoy were two up as Brolly tapped home from six yards after Paddy Doherty could only parry a cross by Gary Wilson.

The 20th minute hadn’t arrived by the time Convoy had a third. The experienced McElwaine fashioned the chance, combining with Brolly before gliding beyond three defenders and drilling the ball emphatically to the Drumoghill net.

Drumoghill did get a goal back when Hamilton headed home from Chris O’Donnell’s ball into the mixer.

JP Malley went close for the visitors after a mix-up in the home rearguard, but O’Donnell managed to get back and clear the danger.

Ten minutes into the second half, Malley put the game firmly beyond Drumoghill’s reach. A wonderful first touch, after a pass from Wilson, teed himself up and the ace striker made no mistake.

Drumoghill had a big chance on the hour when Liam O’Donnell was sent clear by Moore. Gallagher, however, was out to deny the Drumoghill attacker.

Late in the game, Doherty saved from Convoy sub John Doran, but the Orchard Park side had done enough to keep their promotion charge on track.