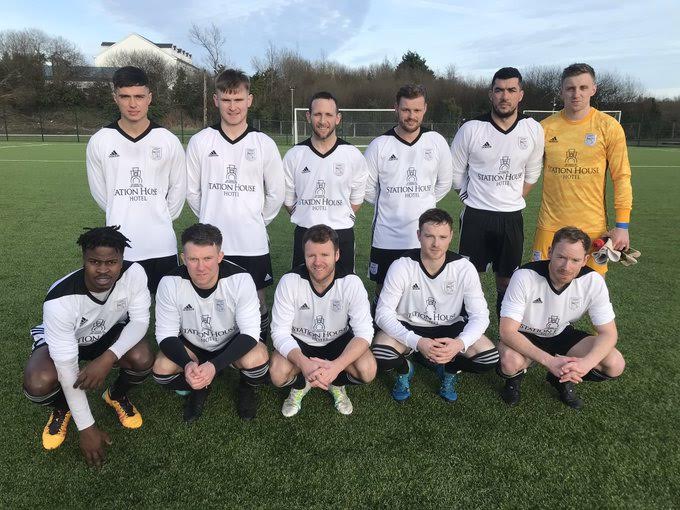 FOR THE second time in five days, Letterkenny Rovers gave opponents a two-goal head start before hitting back to win.

After Rovers came from two down on Wednesday night for a 5-2 USL win over Derry City Reserves, the Cathedral Town men repeated the trick on a chilly Sunday to advance to the Knockalla Caravans Senior Cup semi-finals. Rovers scored their four goals in the final 28 minutes to defeat their old foes.

Dean McCarry and Edward O’Reilly had Fanad two in front at half-time, but a BJ Banda double got Letterkenny on their way to victory.

Rovers turned the tide with Matty Harkin and Gary Merritt netting late in the game to seal progress.

Heavy overnight frost had renedered Leckview Park and the Aura Leisure Centre as unplayable, but it was Fanad who swiftly thawed out.

Johnny Logue, with a diagonal ball, picks out Matthew McLaughlin down the right channel on 12 minutes and his centre was turned home by McCarry.

Fanad – without a win in League football so far this season – had a real purpose and McCarry narrowly missed a converting touch to another McLaughlin ball soon after.

However, Fanad doubled the lead in the 32nd minute as O’Reilly pounced quickly to steer home after Rory Kelly, the Letterkenny goalkeeper, beat away a McLaughlin free kick.

Kevin McGrath should have got Rovers off the mark before half-time, but he shot wide from a great position when picked out by Harkin.

Rovers laid siege on the Fanad penalty area at the outset of part two, but Connor Gormley and BJ Banda saw efforts blocked on the line.

Fanad were standing tall, but their resistance broke on 62 minutes when Banda drilled to the net from close range.

Rovers had penalty appeals turned away when, first, Harkin went to ground and then shouts for a handball were turned down by referee Packie Coll.

Eleven minutes from the end, Rovers were ahead as Harkin finished after Cannon saved a Lee Toland free kick.

Johnny Bonner forced the back-peddling Cannon to smartly tip over from his ambitious long-range attempt, nut Rovers did add a forth in added time when Merritt converted the rebound after Banda’s penalty was saved by the Fanad ‘keeper.