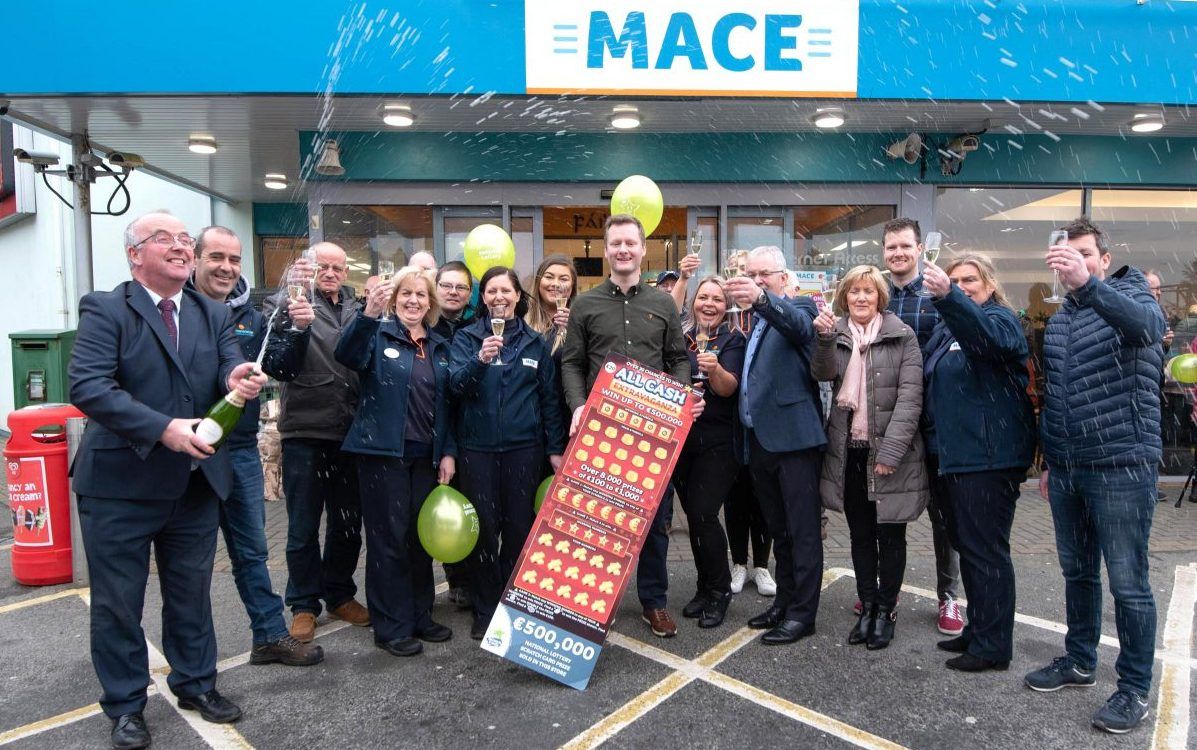 A Christmas gift just keeps on giving for Donegal’s lucky winner of a half a million euro scratch card prize!

Celebrations are well underway in Crolly after it emerged that someone is starting their 2020 €500,000 richer thanks to an All Cash Scratch Card.

Celebrations at O’Donnells Mace Crolly Co. Donegal after a €500,000 scratch card was sold at the store. Shoppers at the store celebrating the win at the National Lottery announcement are from left are Joe Gallagher, Mary O’Donnell and Sarah McGee. Photo Clive Wasson / Mac Innes Photography

The lucky winner is keeping their identity private, but they have revealed that their gains came from a Christmas present gratefully gifted from a family member.

The winner said they still can’t believe their luck as they revealed their very practical plans for the money.

The delighted winner said, “I’ve had a couple of weeks to come to terms with being a half million euro richer but it still hasn’t sunk in. Over the Christmas, all of the family exchanged gifts as usual, and one of my relatives handed me a Christmas card with the All Cash scratch card inside.

“It wasn’t until days later after Christmas that I finally got around to scratching it and my initial reaction was that there must be a mistake on the card – there is no way that I could have won a half million euro just like that.”

After taking a number of weeks to come to terms with their win, the Donegal native discussed plans for the prize.

“The first person I told was the kind relative who bought me the scratch card, so that was a very interesting conversation!

“Of course, my whole family is absolutely thrilled with my win and I plan on splitting up the entire prize between them all so that we can enjoy it together.

“My plans for my share of the winnings is to pay off my mortgage and some bills and with whatever money I have left over, I will treat myself to a new car and a long sun holiday,” they said.

The lucky €20 All Cash Extravaganza scratch card was sold in at O’Donnell’s Mace Service Station in the Gaeltacht village of Crolly.

Store owner Stephen O’Donnell was overjoyed with news of the €500,000 win in the locality which he described as ‘truly life-changing’ for one of his customers.

“We’ve been in business in Crolly for over 30 years, and I’ve never seen that level of excitement in the village that this win has brought. We have been absolutely inundated with people from the village coming to the store to speak of their excitement of the win.

“We are just thrilled for the winners and we hope that they enjoy their prize. We’ve had quite a lot of media interest too. At this stage, I have done more media interviews than any politician in the country!” he said.