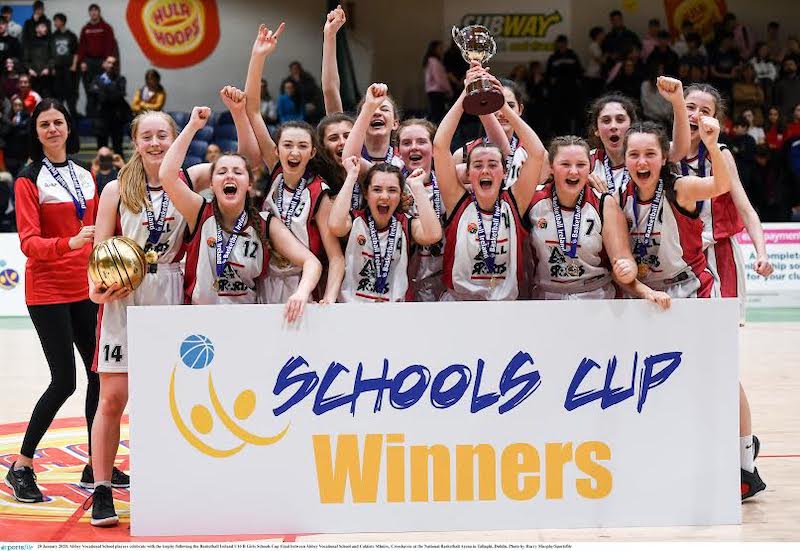 ABBEY Vocational School were crowned Under 16 B Girls All Ireland Schools Cup champions in Tallaght this afternoon as they put in a dazzling third quarter display to start them on the road to victory.

A MVP performance from Sarah Donovan saw the Donegal school win out 47-26 in the end behind a superb display from the talented young player.

The opening exchanges were extremely close, with Crosshaven edging into an early three-point lead thanks to a huge three-pointer from Alex Fegan and two free throws from Lauren O’Connor.

Abbey soon hit their stride though, with Emma Meehan, Sophia Maziuri and Sarah Donovan knocking down some big scores as the clock ticked down to open up an 11-5 at the end of the first.

The second quarter saw nothing between the sides early on, with free throws from Fegan for Crosshaven match by a good bucket from Sarah Donovan at the other end. Some really nice worked scores from Colaiste Muire followed, with Lauren O’Connor leading the charge offensively for the Cork side, and though they outscored Abbey VS in the quarter, they still trailed 16-12 going in at the half.

Abbey Vocational School upped the intensity in quarter three though, and with just three minutes gone in the quarter had opened up a 22-13 lead, thanks to scoring from

Big defensive pressure from the Donegal side kept scores at a premium for Colaiste Muire early on, and despite hard work from O’Connor and Fegan, Abbey continued to push on, driving hard at the basket with Donovan, Ella MxKinney, Amy Carr and Roisin Gillespie all landing big scores to see Abbey into a big 37-18 end of quarter lead. Momentum stayed with the Donegal side in the fourth, and despite the best efforts of Lauren O’Connor and Fegan, Abbey had too much firepower in the end and won out 47-26.