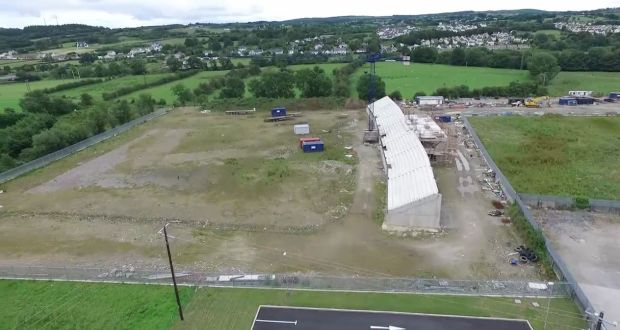 FINN Harps appear to have been given fresh hope regarding a funding allocation for their new stadium in Stranorlar.

Having been hit with the blow of the project being omitted from the Large Scale Sport Infrastructure Fund (LSSIF) announced recently by Minister Shane Ross, the ‘Donegal Stadium’ has become something of a political football, as the General Election comes into sharp focus.

Harps have been critical of manoeuvres behind the scenes that resulted in the development being excluded.

However, at a meeting of the club’s Board of Directors in Ballybofey on Monday night, Harps received a chink of light.

Minister Griffin confirmed that Harps’ application, together with support materials, had been sent to the Department’s Strategic Research and Analysis Division (SRAD).

‘There is no need for them to wait for the next round,” Minister Griffin wrote.

“The successful applicants are all being sent to SRAD for further assessment and sign-off. This is a requirement of the Public Spending Code.

“In other words, while we didn’t recommend a grant for Finn Harps last week, they are at the same stage of the process as the successful applicants. I have no doubt that SRAD will raise queries/concerns and we will have some back and forth with the club before a grant could be recommended but that is not unusual.”

Work has stalled on the development since late 2014 when the structure of the stand was first erected and McLoone has laud bare the club’s frustration.

Harps expected the €6.7million project to be included in the funding announced but, despite a prior commitment from the Department to 100 per cent funding of phase one – a 1,900-seater stand, changing rooms, offices, a new pitch and floodlights – it was absent.

Already, around €1.5million has been provided to the project and Harps have issued a cautious welcome to the Minister’s comments.

In a statement Harps said: “In previous communications from Minister Griffin and the Department it mentioned that the Club may have to apply for future calls for the Large Scale Sports Infrastructure Fund or alternatively appeal if unsuccessful so the absence of this terminology in his latest note could certainly be deemed as progress.

“Unfortunately, the latest note does confirm again that Finn Harps were not recommended for a grant in last weeks announcement.”

Harps’ Stadium Development Officer Paul McLoone said: “I appeal to all concerned to make a decision very soon as the structure currently in place will not be fit for purpose much longer and ‘kicking the can down the road’ is not an option.

“It has dragged on for far too long so I don’t care who gets the credit for getting it done as long as it is followed through to completion.

“It would be a crying shame if our generation failed the youth of the County by not finishing this development so please decision makers let’s get the stadium built.”