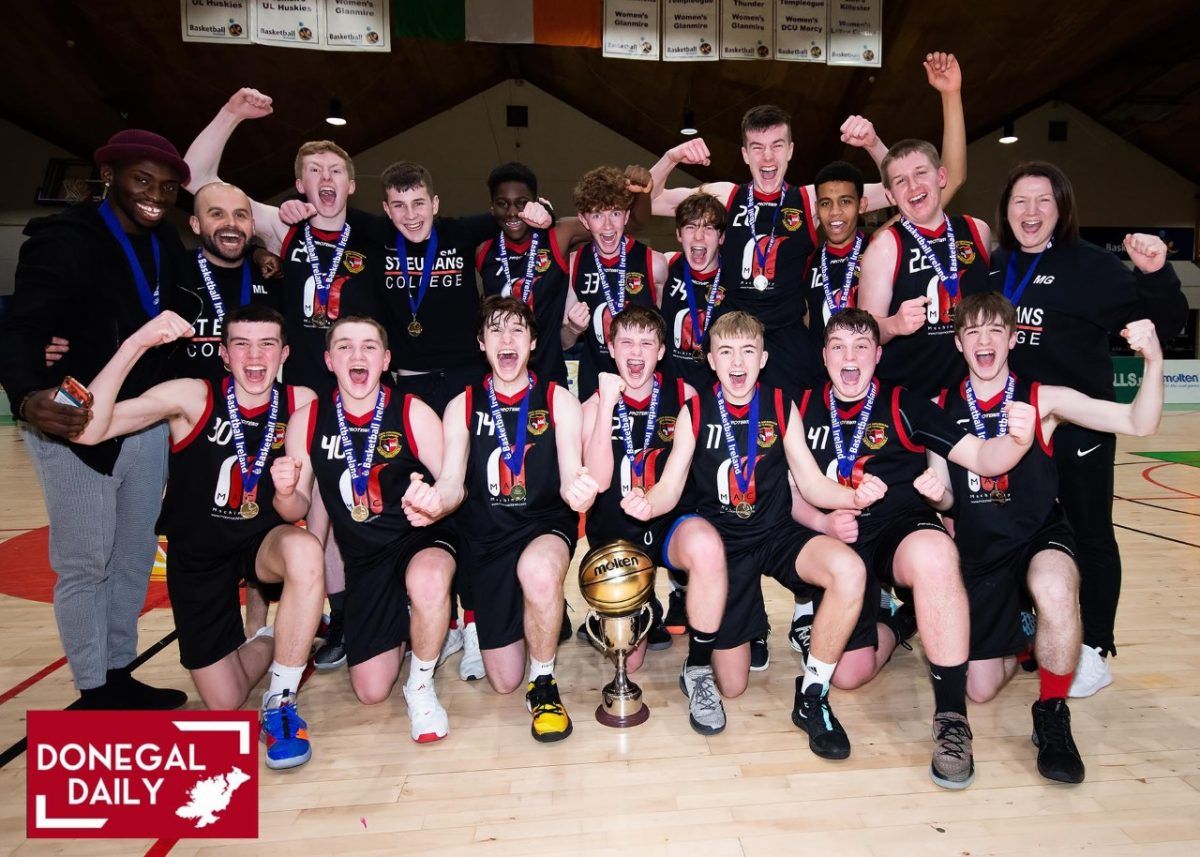 St. Eunan’s college will be jumping for joy as the u-19 basketball side win the All-Ireland B final.

Speaking to Waterpark College’s Manager before the game Mark Dunne spoke about how critical the first quarter would be for his side.

The Munster side missed vital chances to score from outside the paint missing 7 threes. Eunan’s capitalised and made sure their fast footwork counted with towering teenager Killian Gribben contributing 6 precise points to help swing the momentum in the favour of ‘The College’.

‘The Park’s Rapid response drew them level with 6.48 left in the second quarter and O’Reilly’s scoring continued taking his tally to 13 for the game but Eunan’s soon showed their class with another run of unanswered points, 8 for 0 this time, leaving 3 minutes left before halftime.

A solid defence from the Gribben and Payton managed side forced their opponents into 6 consecutive missed shots and despite the Waterford side scoring 16 in the second quarter, The Letterkenny students took a dominant 38-26 lead at the break with both Gribben and Cassidy going into double figures with 18 and 11 respectively. However, a notable mention must go to Ramuel Soler maintaining his 100% record from the line scoring 5/5.

Eunan’s started as they meant to go on and their siege on the capital continued, LYIT Donegal’s Luke Cassidy who is also a student at the Sentry Hill secondary school inspired 6 quick points and extended the lead even further to 18 with 3.39 left in the 3rd quarter, scores from Thomas Reynolds and a momentous dime from Max Leadly also contributed effectively to the scoring.

Pinpoint passing from Eunan’s and several superb steals from the southerners made this contest a joy to watch.

Without doubt the students back in the study hall will be biting their nails, a great incentive from the school board to stream the game live with donations going to the Callum Friel fundraiser.

The Waterford side made sure the comeback was still possible with a deficit of 16 opening the fourth quarter, the tremendous travelling support made sure their tenacious and ferocious school mates knew they had their backs and the exuberant atmosphere inspired an outstanding performance. Tension was high, the passion was flowing, and it was their game to lose. Gribben added yet another to take his tally to 24 and give his side a 22-point lead.

Pressure was mounting on the court, some exceptional basketball being played at the home of Irish basketball in Tallaght, the glass was rattled but point after point the clock elapsed. Both sides emptied their respective benches with 1.32 left as the LED screen read 78-50 and with 30 seconds to go the game petered out.

A warm standing ovation given to both teams that is without doubt hugely deserved but watch out for these names in the future as there is most certainly stars of Irish basketball to come.

The celebrations will be in full swing as St. Eunan’s College of Letterkenny who join Abbey vocational school under 16B girls in bringing a national basketball title to Donegal.

Man to appear in court after assault...