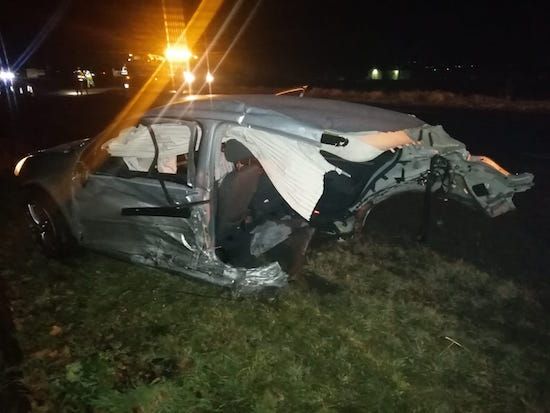 Man’s miraculous escape because he was wearing a seatbelt

A motorist involved in a horrific road crash in Inishowen last night miraculously walked away with minor injuries.

The man’s car, which was involved in the two-vehicle collision at Ture in Muff, was completely cut in two.

However, a Garda source told Donegal Daily that the man walked away from the wreckage with just minor injuries.

And one of the reasons Gardai are putting down to the miraculously escape is the fact that the driver was wearing a seatbelt.

The Garda source said “It was a horrific scene and we were sure there had to be serious injuries or even worse.

“The car was completely cut in two and separated.

“Thankfully the motorist was wearing a seatbelt and I have no doubt that is what prevented him from suffering more serious injuries.

“We could easily have been dealing with another fatality here but thankfully we are not.

“I would again appeal to people to wear their seat belts at all times.”

Meanwhile, the response times of ambulances across Donegal are once again under the spotlight as a result of last night’s accident.

It is understood an ambulance had to travel from Dungloe last night to the crash scene taking 50 minutes to get to Muff.

Man’s miraculous escape because he was wearing a seatbelt was last modified: January 23rd, 2020 by Staff Writer
FacebookTweetLinkedInPrint
Tags:
carcrashGardaimuffSeatbelt